We’re here at SXSW, where Facebook’s Senior Platform Manager Dave Morin is speaking about The Search for a More Social Web.

He says that computers have largely been antisocial – it was only with the advent of the computer that we’ve been playing games with ourselves. Only in the last few years have computers really started to become social. The introduction of Facebook’s new real-time homepage has offered a big boost to becoming more social. Facebook’s new Pages allows us to follow the actions of our favorite brands and celebrities throughout the day.

Gary Vaynerchuk has taken the stage. Vaynerchuk has begun to produce content on a new public profile, and is also offering some of his thoughts on the switch from a regular profile to his new Page. “I wanted more than 5,000 friends, that’s really what this allows me to do”. Vaynerchuk says that people are talking too much – this new product on Facebook allows people to listen, which is a key part of interaction. “It also saves me around 40 Emails a day of people asking for my friend requests”.

Dave Morin is now speaking about the new home page, which should now be available for everyone (it has been gradually rolled out to users over the last few days). The new page makes it easier to filter through the items in your stream, which is becoming increasingly necessary. Now your stream is giving you more control than ever.

Now shifting to Facebook Connect. Facebook Connect allows users to make their identities portable. It allows us to see what our friends are up to – he jokes “If your friend does something on the internet and nobody knows about it, did it actually happen?”.

Points out TechCrunch, where comments have become more authentic than ever before because users can log in with real names, which are linked to their Facebook accounts. Also pointing out other Connect-enabled sites like Geni and Joost. Aardvark just launched with Facebook Connect as well.

But Facebook Connect isn’t just about the web. He points out Xobni. Also, working alongside with Apple to seamlessly transfer photos to Facebook from iPhoto.

Morin has taken the stage once again, highlighting how Facebook is looking to be as open as possible. 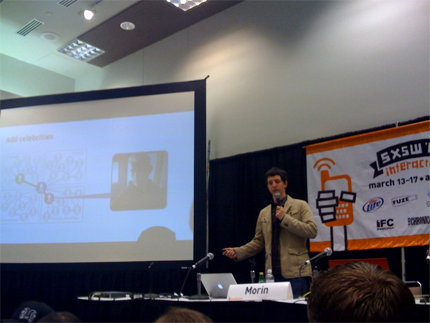 Facebook Connect is now on the iPhone, allowing iPhone apps to tap into your social graph for the first time. Users can connect across platforms (You can play a game on the iPhone with a Facebook friend using a browser-based version).

SGN CEO Shervin Pishevar has taken the stage. SGN apps have 10 million installs. SGN has created a new game called Agency Wars (iTunes Link). Gamers can play as CIA, MI6, and more. Can challenge your friends and assassinate them. Leave clues in the real world. iBowl (one of SGN’s popular Wii-like games) supports live gaming. Now you can bowl with your Facebook friends anywhere in the world live.

Tapulous‘s Andrew Lacy is now speaking about Tap Tap Revenge 2, which just launched last week. It is currently number one on the App Store. The game is now a lot more social, with the introduction of Facebook Connect. Want to increase engagement, by being more social.

Patrick O’Donnell of Urbanspoon, a popular restaurant guide with over a million restaurants in its database. The iPhone app, which offers a slot-machine style recommendation engine for restaurants, has seen 4 million downloads and over 200 million ‘shakes. Now supports Facebook Connect.

Joe Greenstein of Flixster, which is used by around 17 million people per month to get movie recommendations. iPhone app has been out for around 8 months, with 3.3 million users. But there wasn’t a good way to connect what you were doing on the phone with what you had done on the web. Just approved in the App Store with version 2.0.

Morin has just annouced a New Round of Funding For fbFund – Just for Facebook Connect, and developers on the iPhone.

Q&A
Q: Will there be geotagging through the iPhone uploading?
A: Location is something we’re aware of, we know the world is heading that way, something we’re thinking about.