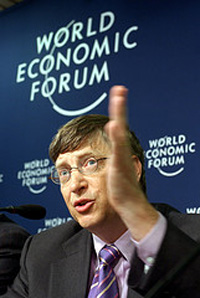 Forbes released its list of the world’s billionaires and it looks like the U.S. tech billionaires took a pretty hefty hit from the economic crisis. The 40 tech billionaires we identified on the list collectively lost $81.5 billion compared to their standing in last year’s list. That is a drop in the bucket compared to the $1.4 trillion in net worth that disappeared from the entire Forbes’ list, which also saw the total number of billionaires drop to 793 from 1,125, the first year-to-year decrease since 2003.

The tech billionaires are still collectively worth $203.4 billion. Although Bill Gates rose to the top of the list after falling to number 3 last year, the move was bittersweet. Gates lost a massive $18 billion in the past year. Larry Ellison from Oracle lost $2.5 billion but moved up 10 spots from last year, to number 4 on the list. Larry and Sergey from Google both took a hit of over $6 billion each.

We also included some media moguls with technology-related businesses. Michael Bloomberg had a very good year. He rose nearly 50 spots on the list, with a gain of $5.5 billion. But News Corp’s Rupert Murdoch saw his net worth cut in half to $4 billion. Viacom’s Sumner Redstone plummeted down the list, from number 137 to number 701 on the list, losing $5.8 billion in the past year.

Despite these massive losses in wealth, most of the big tech titans all made the list, including, Gates’ old partner Paul Allen, Michael Dell, and Steve Jobs. Facebook’s Mark Zuckerberg didn’t make the list this year, however, with his estimated net worth dropping from $1.5 billion to $600 million. He’s still smiling though.