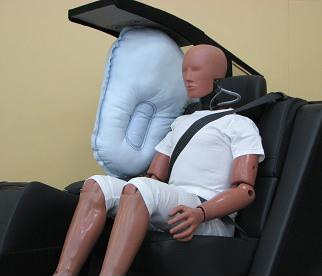 Toyota today said in Tokyo it has developed the world’s first rear-seat center airbag to better protect passengers sitting in the back seats from a side-on collision, especially in regard to secondary injuries. The Supplemental Restraint System (SRS) rear-seat center airbag will be available in Toyota cars sold in Japan in the near future (the company didn’t say which models will be equipped with the airbag).

The idea of a rear-seat center airbag may sound a little odd at first, but it makes sense. Toyota says their airbag will deploy from the top of a center console in the back seat when a car is hit side-on. The goal is to reduce the danger of injuries following collisions between passengers sitting in the back.

Toyota didn’t say when the new airbag system will be used in cars sold outside Japan.