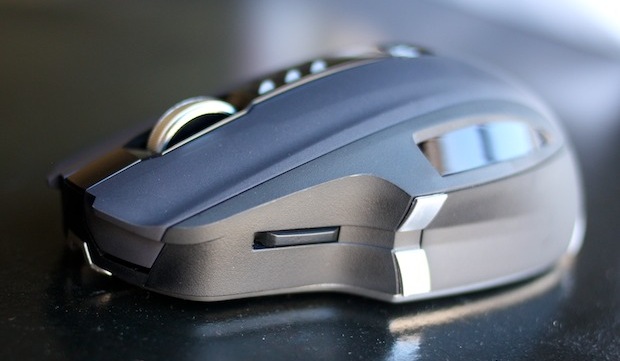 Update: the skipping issue is a mousepad problem, I have confirmed on two mice. Too bad the best mousepads are cloth! Wheel still sucks.

It was late last year when Microsoft started really putting more juice into their Sidewinder lineup. With the X6 keyboard and X5 mouse, they showed a new aesthetic and commitment to hardcore gamers. But driver files showed an upcoming X8 mouse — which I’ve now had a chance to check out. The verdict? It’s a mixed bag, but in the end there’s only one thing I can say. Most of the findings are in the nice long video review below, but I’ll summarize for those of you at work.

Update: Microsoft is concerned that I might have gotten a bum mouse. I’ll post a full update as soon as the replacement unit arrives. I’d be happy to give at least a partial recommendation of the mouse if it didn’t have this issue, so we’ll see.

The X8 is Microsoft’s wireless gaming mouse. It’s got the same chunky, quasi-futuristic look as the X5 to it, and it glows occasionally (I couldn’t figure out its method) with a red light like the X6 keyboard. It has a little LCD screen for displaying the DPI or a couple icons, but to be honest it doesn’t come to much use, although it is very well-placed for visibility.

To start with the good parts: the mouse is pretty comfortable. It’s big, but a little smaller than the X5 if I remember correctly (which was enooormous). You have to hold it pretty far up on the thing, which is against my instincts, but once I got used to that, the feel of the mouse improved. The thumb buttons are great and well-balanced. I don’t like having to reach my thumb forward to get another button, so placing them above and below where your thumb rests works out perfectly. 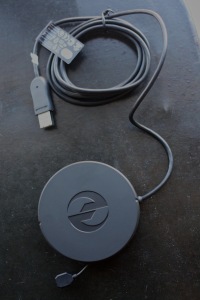 The “puck” is fantastic. It’s a combination wireless receiver, charger, cord wrapper, and extra mouse foot container. It does it all perfectly, and it’s a nice-looking little thing too. I didn’t see any need for new feet, but hey. Good to know they’re there. The charging cable is, and I mean this, the best charging solution I’ve ever seen. The tiny, light connector gets picked up by magnets in the mouse’s tip and just pops right on. It works perfectly every time and I want to give Microsoft serious props for it.

The wireless performance was excellent; having the receiver right there ensures that there is no interference from your desk or components as there may be when the receiver is stuck into the back of your PC. I never felt any lag at all and I don’t think that it was skipping (more on that shortly) because of a signal problem.

Macros work as advertised. It’s a bit weird to configure them: you have to set a mouse button as the macro editor, edit your macros, and then whatever one you have selected becomes the assigned macro. Not the most elegant solution, and like the macro on-the-fly button, it’s not explained anywhere.

Well, on with the bad. First, the scroll wheel. It’s awful. It’s loose, it’s loud, it’s slippery. The buttons in it are useless to me because the whole operation is so squishy. I couldn’t be sure whether I was hitting a button or just wiggling the wheel. 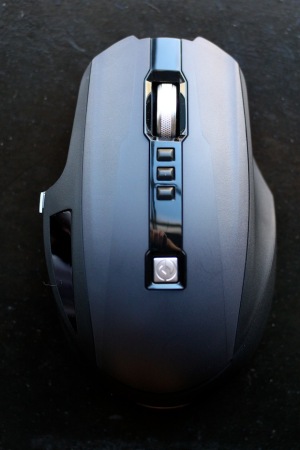 The DPI buttons are stuck as DPI buttons. It makes more sense for an interface like that to maybe have a “DPI up,” “DPI down,” and “DPI default” setup, or maybe just let the buttons be whatever you want, but they are stuck being the three settings you choose in the control panel. I much prefer either Logitech’s customizable 5-step system with up/down buttons, or Razer’s excellent on-the-fly sensitivity system.

The biggest problem is the tracking. I don’t know what the story is here, and if I got a faulty mouse I’ll happily reevaluate, but the Sidewinder X8 jumps. It jumps all the time. It makes little jumps of about 10-12 pixels, which makes it hell to select text, do any kind of photoshop work, or snipe in a game. It did this at all DPIs, all sensitivities, whether it was plugged in or not, and no matter where I put the puck. I had to cut my review period of the thing short because it was bugging me so much. Sometimes it wouldn’t do it for 10 or 15 minutes, but when it did happen, it skipped every second or more. I got a regular retail mouse to review just like you might get at a store, so this is final hardware. The drivers have been out for months. If this is a problem with every Sidewinder mouse, it’s a deal-breaker for sure.

So the final tally wouldn’t be bad if the mouse didn’t skip. Bad scroll wheel? Okay, whatever, nobody’s going to beat Logitech’s ever anyway. DPI not super helpful? Well, I can tweak it so it works out. But the jumping cursor? Hell no, I can’t live with that, and you shouldn’t either. Now I say again that it’s possible I got a bad unit (happened with the SteelSeries Ikari), but that’s neither here nor there. The mouse I got, while nice in theory, is simply too annoying to actually use. If they fix this, I’ll jump for joy and post an update, but until then I can’t advise spending the $80-$100 on a jumpy mouse.