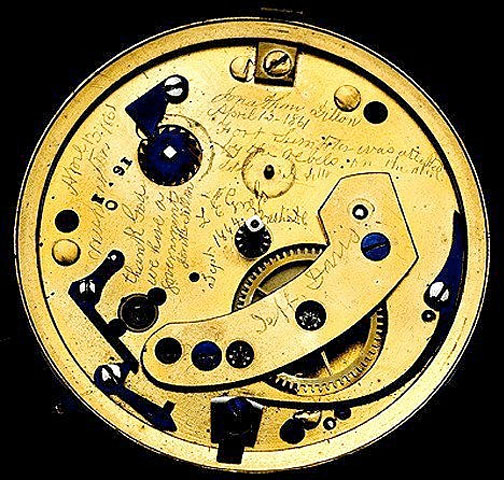 It’s a little known fact that watchmakers like to note the time and date of their work on the inside cases of watches. If you ever have something repaired at a watch shop, chances are there’s a little note – “change battery”, “crystal” – in the case. This is fairly common and it’s fun to open an old watch and find notes from long-gone watchmakers secreted inside.

Well, this note is a doozy. In 1861, a watchmaker named Jonathan Dillon wrote “Fort Sumpter was attacked by the rebels’ and, three years later, “Thank God we have a government” on the eve of the Civil War. He probably used a tiny engraving tool and he literally wrote all over the inside of the watch, under the face, in a spot the no one would probably ever see.

His story was first written down in the New York Times in the early 1900s and yesterday the great-great-grandson of Dillon, Doug Stiles, watched as a watchmaker opened the case to reveal the writing inside.

The watch appears to be a Waltham William Ellery from Connecticut in a gold case with fleur de lys hands and Roman numerals. Some are also saying it was a British watch but it looks like a standard Civil War railroader.