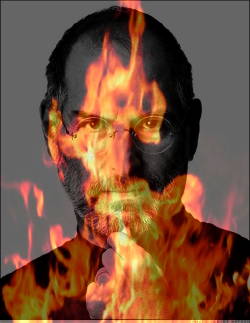 What has Apple done?! Seriously, Apple, what is going on here? In a desperate attempt to innovate train moving, you have infuriated the masses and are causing hysteria all because the iPod shuffle is tied down to proprietary headphones. After all, there is nothing tech fiends love to do more than spending $79 on a 4GB iPod and then hooking up $349 Shure earbuds.

New Shuffle……..No way will I buy an iPod that REQUIRES a PROPRIETARY earbud that houses all the controls! You will be locked into having to purchase Apple Earbuds or wait till 3rd party manufacturer come out with an equivalent. The point is that something thats suppose to be as simple as a shuffle, now your left having to buy “special” earbuds.

We know that you were just trying to shrink the tiny MP3 player to the max and had to come up with someway to control playback without compromising that goal. It’s a shame that other MP3 manufacturers can’t offer something competitive in terms of price, storage and size. We’re basically forced into buying from Apple if all those things are of the utmost importance.

As is often the case, CrunchGear has missed the real story in its breathless product release announcement. The Shuffle is now tied to proprietary Apple headphones. Others have tied music players to custom headphones in the past, and paid dearly for it. Ear canals are different, listening preferences are different, etc. Dictating headphones and then (hey, wild guess) offering them in only one style is a recipe for disaster.

I’m guessing Apple will declare it a breakthrough product yet abandon the proprietary headphones for the next Shuffle.

Look, everyone’s ears are different. Mine grow fungus like a Petri dish. Shame on you, Apple, for trying to trick us into your little scheme that will FORCE us to use the most popular earbuds in the universe. We will not be tricked so easily.

Hey, Apple!.. Where are the keys?! What if I want to use my own earbuds?

Most of us have spent a lot of cake on earphones already and have grown accustomed to wearing ’em. I believe that Satan has a special place reserved for you in Hell full of Windows Vista computers and Zunes. Even those don’t lock you down to proprietary software and now *gasp* earphones!