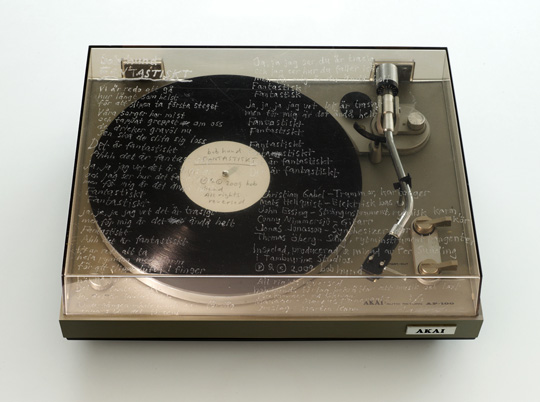 Although this is more a combination publicity stunt/performance art piece, it’s a fun idea. Swedish indie band Bob Hund is releasing his latest single in an even weirder way than Radiohead’s In Rainbows. He’s selling the original master vinyl (the only copy) on eBay, complete with a turntable to play it on. There will never be any other copies made. Limited edition indeed!

As of this writing it’s going for over $1775, and that’s without shipping. It’s got the lyrics and everything etched onto the lid as well, so that’s really part of the package. I think it’d be better if the record was sealed onto the turntable, but hey, I can do that with my own stunt release.

Who wants to start a pool guessing the date it shows up on Soulseek or a torrent tracker?

Our helpful commenters note that the Swedish part of the site says that the album is fastened to the turntable, and may actually only play 30 times before being worn out. Thanks, guys.