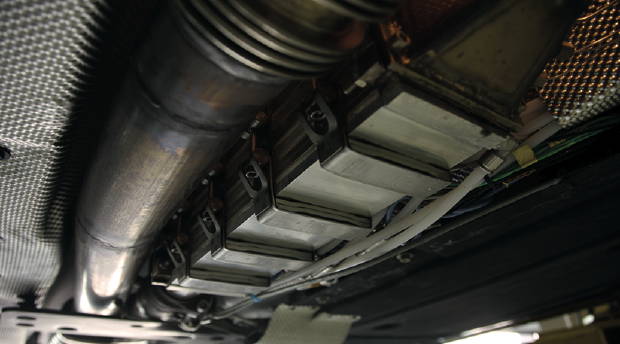 BMW is out to improve its vehicles efficiencies and has turned to NASA for help. The car company plans on equipping thermoelectric generators on upcoming models to power secondary systems and therefore improving gasoline economy. Now, this update to BMW’s Efficient Dynamics isn’t a huge leap forward, but rather an evolutionary step towards the space age.

Some satellites employ similar thermoelectric generators on satellites where the power is derived from the heat generated by radioactive decay which is then turned back into electricity. BMW’s system works similarly – sans the nuclear power of course – by harnessing the combustion engine’s hot exhaust for something other than polluting. This system generates up to 200W of power which is enough to power even high-demand electrical systems such as climate control and therefore taking strain off of the motor’s electrical generation system.

This passive system improves gasoline efficiency by nearly 5%. That’s not a whole lot, but it’s better than stop-start brake energy regeneration that recovers energy wasted on braking. Plus, it shows that the company is committed to find better ways of working with current combustion platforms rather than reinventing the wheel in times of economy doom and gloom.

BMW expects to get this system on models by the 2014 model year. Better start saving pennies now.