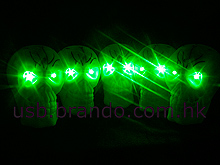 Exhibit: Ritual Skull Circa 2009
Marked “Brandu” [?-2010]
Materials: Plastic and electronic parts (pre-Quantum)
This example of early 21st century religious accoutrement points to an odd sect of skull worshippers based both in modern Australasia/Japanese Republic and in the former United States of America. The skull contains a small light and a “sensor” without 3D vision that can “see” motion. Modern sci-bots still do not understand the purpose of the item but believe it could have been involved in a solstice ritual.

It is believed that the skull worshippers called their god “Brandu” and the item was somehow involved in “twittering,” a form of religious observance similar to davening. Googlemind reports no information on the sect after the Great Depression of 2010 and “twittering” fell out of favor during the first and second Moon Wars.