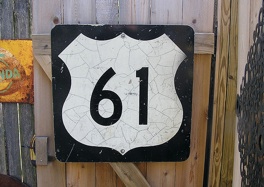 The concept of building a Digg for music has been tried before (see Contrastream or iJigg), but a music streaming site called thesixtyone is the closest I’ve seen so far to getting the formula right. It features only about 50,000 tracks self-uploaded by indie artists and music labels, but visitors can listen to the full stream of each track and vote their favorites up the rankings by hitting the “heart” button. The results are highly listenable playlists by genre, tag, or just what’s hot right now.

The key to making the site work, however, is not simply the Digg-like voting system. By now, that is becoming a pretty common feature (even the Hype Machine uses hearts) and is fairly easy to manipulate. The voting on thesixtyone is combined with some concepts learned from video games. Listeners cannot just indiscriminately heart up any song they want. They are given a limited number of heart points on a daily basis. More points can be earned for identifying good music early or recruiting friends to the service. Songs can only be given positive heart points, however. They can’t be demoted for being really bad. But the fact that the number of points are limited means in theory that only the most deserving songs will get enough to make it to the home page or the top of any given category.

Besides the game play elements, every song can be commented on or shared, and you can see who else liked the song. There are listening and leaderboards, showing the members with the highest reputations and their playlists of hearted songs. Artists can be subscribed to so that you can be alerted when they upload new songs to the site. As you are listening to a song, it keeps playing no matter where else you jump to on the site.

The site also makes it easy share music elsewhere on the Web by posting individual songs to Facebook, Twitter, MySpace, or the Global Grind. You can email a song link or embed the entire stream on another page. (Although, it is not easy to find these options. You have to click on the tiny “comments” link to open them up). For instance, I’ve embedded “Repetition Kills” by the Black Ghosts below. It would be better if you could embed entire playlists.

Thesixtyone is a Y Combinator startup that launched a year ago. It is now attracting about 100,000 unique visitors per month and 10 million pageviews, say the founders. That suggests a high level of engagement. The average session is 40 minutes, and registered users typically spend 2 hours a day on the site (although much of that is no doubt is simply listening to it with a browser tab open while doing other things). Still, Y Combinator’s Paul Graham says the service is “ramen profitable” from ads and Amazon affiliate links. 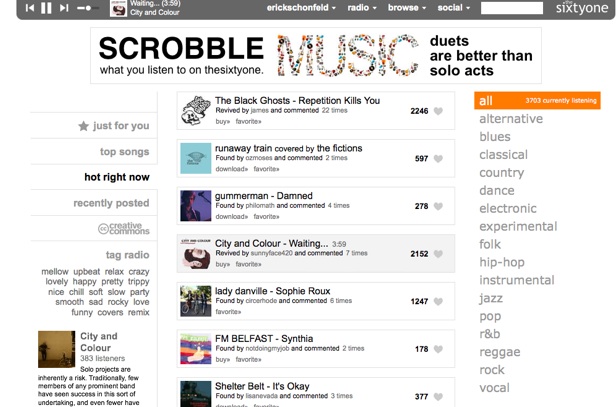