Global mobile payments network Paymo and social network hi5 have partnered to let members in 24 countries use their mobile phones to purchase hi5 Coins, hi5’s virtual currency. Countries where Paymo will be made available to hi5 users include the U.S., Canada, France, Hong Kong, Thailand, Russia and Colombia.

Paymo’s mobile payment system doesn’t require users to have a credit card or bank account. Users enter their cell phone number on the site, reply to a Paymo text message and then all virtual charges on hi5 are automatically charged to the user’s monthly cell phone bill. It’s pretty easy and similar to UK mobile payments service, Zong. Paymo says that over 75 percent of the online community worldwide does not have a credit card but 3 billion consumers own a mobile phone. With that in mind, the company is hoping their system, which avoids credit cards or bank accounts, will take off.

Unlike some of its competitors, such as Zong and Mobillcash, whose systems are limited to certain regional areas, Paymo can be accessed in 45 markets around the globe, enabling mobile payments in Europe, North and South America, the Middle East, Africa and Asia. Paymo recently expanded service in the U.S. after striking deals with mobile carriers AT&T, T-Mobile and Virgin Mobile to allow users to make online purchases using their phone.

Mobile payment systems are gaining traction from social networks, but the issue of costly fees charged by mobile carriers to the payment systems (which are then passed on to the consumer) remains a serious problem. Paymo says that it typically charges users a transaction fee of 10% of the purchase price. The company adds that different cell phone carriers charge varying fees but most are in a range of 20% to 40% of the purchase price, which is a pretty large amount in transaction fees. As we said in our earlier analysis, this could pose a significant roadblock to these types of services, which channel user payments through mobile carriers. It appears that it would be hard to sustain these fees in the long term when transaction charges could be drastically decreased if payment networks accepted credit card or bank account payments. Still, with such a vast coverage area of the world, Paymo appears to be ahead of some of the more regional services. Paymo says that Facebook, which has a widespread international following, would be the next partner it hopes to land in the social network space. 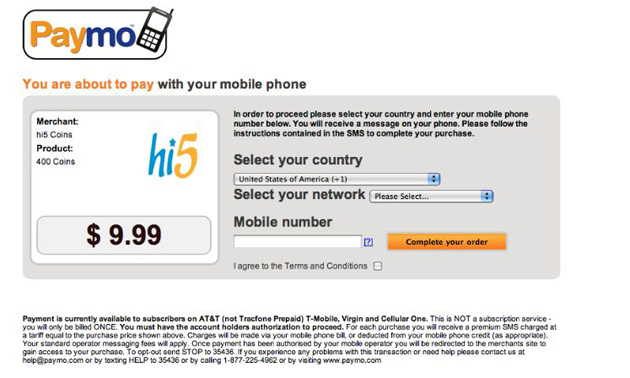