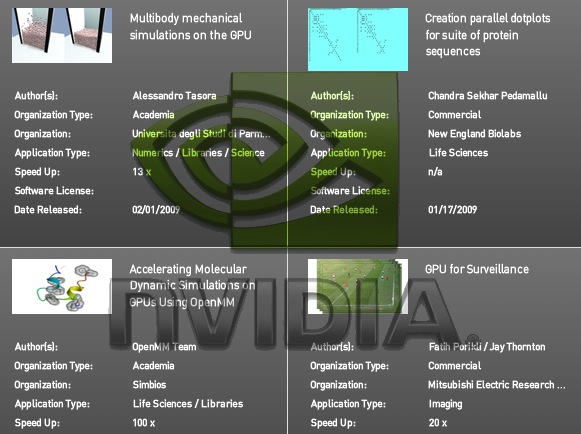 NVIDIA is known primarily for their PC graphics cards, but they’ve been in the news recently both for the expansion of their CUDA and PhysX initiatives as well as (allegedly) developing a CPU to challenge Intel and AMD. They’ve been proponents of parallel processing for quite a while, naturally, and have made some investments in companies like MotionDSP and Elemental Technologies, both of which are developing software that really leverages the GPU.

The success of these investments is difficult to measure (NVIDIA’s been hit as hard as the other semiconductor-related companies, losing 50% of its revenue), but it’s hard to argue with the fact that parallel computing is where practically the entire industry is heading. In light of this, NVIDIA has started what they’re calling the GPU Ventures Program, by which they hope to “identify, support and invest” in companies that are working on GPU-based computing applications. A ton of GPU-accelerated (or simply parallel-ready) applications can be found here at the Cuda website, including image manipulation, physics simulation, and advanced computation.

They’re hoping to draw some of the best startups and the minds within to NVIDIA as a sort of parallel processing father figure. A couple million here, maybe a peek at the new hardware there, and they’ve got themselves a pretty solid partner. I talked with Jeff Herbst, VP of business development there, who outlined the idea of it. It’s very much an investment thing and not some sort of “GPU App Store.” They’re hoping that VCs might like to get in early on what NVIDIA thinks is the next phase of computing. Personally, I was already convinced by the kind of interesting work being done by their partners already, but Mr. Herbst has been talking with many more companies and is planning on expanding their Emerging Companies Summit this fall.

The site is just launching today (any moment now…), and hopefully it’ll be populated with the kinds of hot young startups that tech investors love to just run their hands over.