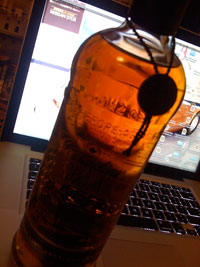 I consider Joel my blogging mentor and when he says this whisky is good, believe him. He drinks a lot.

I’m in Eugene now, and I’ve started sipping from this bottle of Canadian Club 30-Year Reserve. It’s noon and the sun is starting to shine. The dog sleeps on his bed in a parallelogram of sunlight. I need to get to my point before I blow through the rest of this day—and the bottle, which is nearly gone already.

Parallelogram of light. He must be REALLY drunk.

What I’m trying to say here is that Canadian Club is alright. I actually had a bottle of the standard six-year sitting in the bar in Brooklyn to use as a control versus this 30-year bottle, one of 3,000 released by Canadian Club to celebrate their 150th anniversary. They’re clearly the same stuff, still light on the tongue, not too oily, very little oak, with a bit more vanilla sweetness than I think makes sense, but still pleasant enough to let stand on its own, perhaps broken up my a single ice cube if you want to make it suitable for lawn work.