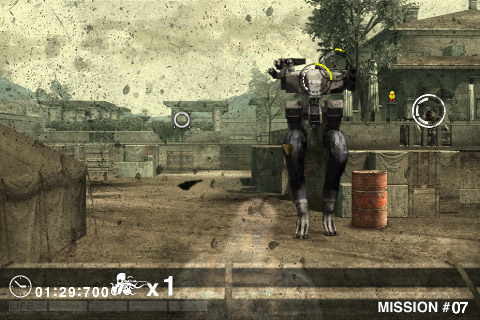 Right around Christmastime was the last time we heard anything about Metal Gear Solid Touch, Konami’s first game for the iPhone/iPod touch. (Why do people refer to the iPod touch as the “iTouch”?) You play as Old Snake, as he sashays around international hot spots—Eastern Europe, the Middle East, South America and Shadow Moses. Who knew the whole of South America could be considered a hot spot?

Konami says we’ll run into “well-known antagonists from past Metal Gear Solid titles,” in this, the “final chapter in the legendary saga of Solid Snake.” Sounds good to me, and it’s certainly good news for iPhone-owning gamers.

Even better news? Expect to see a demo of the game—Konami calls it an “Advance Edition”—sometime this month. It’ll have the first 12 levels of the game right there. Presumably this will be a for-pay demo, as Konami is offering a free upgrade to the full game for owners of the “Advance Edition” once said full game is available.