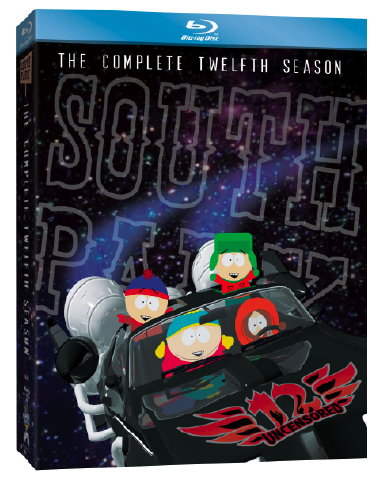 Hey, kids! Happy Friday! Aren’t you excited for the weekend? I know I am! Because it’s a slooooow news day, we thought we’d liven things up a bit with a contest. On Tuesday, March 10th, Comedy Central and Paramount are releasing the 12th season of South Park on Blu-ray and DVD. And we happen to have one copy of it on Blu-ray and two copies on DVD that we want to give to you. Hit the jump to find out how.

A good majority of the CG staff is on Twitter and we want you all to start following us. It boosts our egos and makes us feel important. Over the course of the weekend one of us will spout off a quote from South Park or ask a question about the show and the first to @ us will snag one of three copies. You can @ us with whatever you want, but just be sure to include “South Park” and “Blu-ray” or “DVD” so we know which one you want. Pretty easy, right?

Update: There’s one other way you can win, folks. Give us your best impression of any South Park character by leaving a video comment using Seesmic.

And don’t forget to check out South Park Studios for all sorts of hilarity. Oh, the 12th season of the South Park includes the following goodies:

* “Six Days to South Park: A Day-by-Day Making of the ‘Super Fun Time’ episode of ‘South Park’”
* “Making Boobage: behind-the-scenes footage and interviews of the people who made ‘Major Boobage’” happen
* A behind-the-scenes look at “About Last Night” (available in HD on the Blu-ray version)
* The ever-popular “commentary-minis” by co-creators Trey Parker and Matt Stone