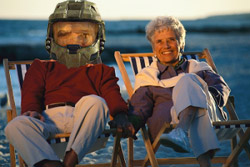 At some point you have to ask Microsoft, “Hey, guys, are you done milking Halo yet?” Then again, I’d have to ask the good people out there, “Aren’t you guys tired of Halo yet?” That, despite the fact that I know the answers to both of those questions: “no” and “no.” Given this, the news that Microsoft is working on another Halo game, based on some Halo comic book about Orbital Drop Shock Troopers—slow clap—,should not surprise me. But it does, as does the fact that someone higher-up at Microsoft just told USA Today that he “doubt[s] we have seen the last of Master Chief.”

The first game, to be fair, was announced last fall. It’s called Halo 3: ODST, and can be seen as an expansion pack to Halo 3. “Seen” but apparently not “wholly described,” since Microsoft’s Frank O’Connor, who’s in charge of Halo such and such, says it’s “significantly more than an add-on…. It’s kind of a detective story. But it’s much more action-packed than that.” Oh, good, because here I was concerned that Halo wouldn’t be an action game; I had assumed Microsoft had decided to turn it into a puzzle game.

So, a Halo 3 expansion pack, not starring Master Chief. Fine, fair enough. But another game after that? Just let Master Chief retire with some dignity already. I fully expect him in the next game to have snappy, burned-out solider dialog like, “Man, I’m too old for this,” and to call his subordinates things like “rookie” and “kid.” /me shakes head