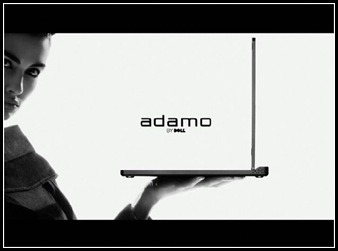 Dell’s got another Adamo teaser, this time a boring 30-second video of a model walking around the set of a photo shoot for 25 seconds with maybe five seconds of the actual notebook being shown.

On behalf of everyone; lose the models, take 360-degree photos of the Adamo, and give us specs, pricing, and availability. If you’re keen on making videos with models, make one with an over-the-shoulder shot of a model trying to use the computer and call it “viral” in a mainstream press release.

Yes, Dell is positioning this computer at fashion-conscious consumers. But unless you’re Apple, even fashion-conscious consumers like to get a rough idea of what they’re buying. Dell’s blog post says: “Picture it — A sultry, laidback photo session. Nina Simone piped in to set the mood. A top model posing languidly with another ultra-thin ideal of beauty – Adamo by Dell.”

All I heard was “Blah, blah, blippidy, blah – Adamo by Dell.”