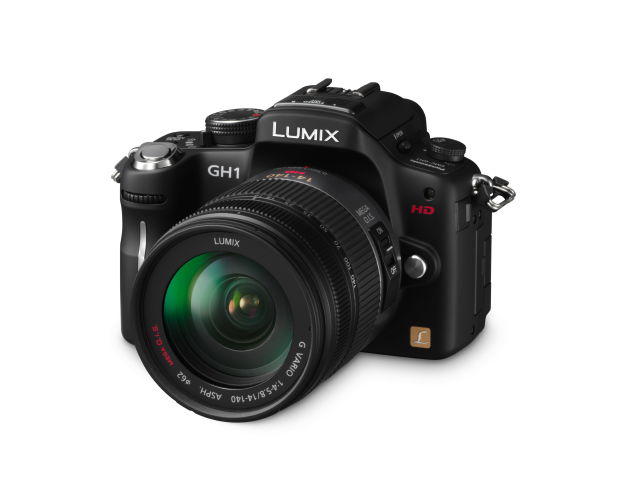 Now we’re talking, folks. Panasonic just announced an updated version of their Micro Four Thirds camera, the G1, that records HD video. Videos are recorded using the AVCHD codec and 1080p video is shot at 24fps while 720p is shot at 60fps. There’s a dedicated video record button on the back of the GH1.

Besides video recording, the GH1 has some new internals by way of a 12.1-megapixel high-speed Live MOS sensor and the dual CPU Venus Engine HD. This is important because Panasonic claims that the dual CPUs cut down on noise, even when shooting at a high ISO. They also managed to pack in all the video recording software and modes that can be found on their point and shoot Lumix line.

“Photographers of all levels — professionals, amateurs and beginners — will be stunned by the range of creative possibilities that the LUMIX GH1 creates in the world of high-quality photography and HD video. Users will be equally amazed by the camera’s easy-to-use design and small size,” said David Briganti, National Marketing Manager, Imaging, Panasonic Consumer Electronics Company. “Beyond its creative potential, the LUMIX GH1, a sister product to the award-winning LUMIX G1, is also innovative and differentiates itself from the pack by recording High Definition video with continuous AF, an indispensable feature for practical video recording.”

In late 2008, Panasonic redefined the traditional DSLR category with its launch of the Panasonic LUMIX G1 — a digital, interchangeable lens camera system that takes the radical step of eliminating the large, internal mirror structure that is currently contained in all traditional DSLR cameras. This innovation allows for dramatically smaller camera body and lens sizes and permits many new, advanced consumer features such as LUMIX G1 “Live View Finder”. With its 2008 launch, the LUMIX G1 achieved several honors, including:

Like the LUMIX G1, the LUMIX GH1 features the Live View Finder system which enables something that simply is not possible with conventional DSLR cameras — the ability to preview the effects of camera settings (e.g., exposure, aperture, shutter speed) before taking the photo. This helps take the guesswork out of the camera setting process and helps users ensure that every photo they capture comes out exactly as they envisioned.

The brilliant 1,440,000-dot equivalent Live View Finder system can also display information settings that a user can see without removing their eyes from the subject. Furthermore, a built-in eye sensor automatically switches on the viewfinder when the user looks into it, then switches it off and turns on the swivel 3.0-inch large 460,000-dot high-resolution LCD when the user looks away from the viewfinder. The 60-frames-per-second Live View is made possible by the Live MOS sensor, which takes real-time signals directly from the image sensor and sends them continuously to the LCD. Both the Live View Finder and LCD provide a 100% field of view — allowing the user to accurately frame and compose a shot from most any position.

At the core of the LUMIX GH1 lies a newly developed 12.1-megapixel high speed Live MOS sensor and Venus Engine HD, which features twin CPUs for outstanding processing capabilities. The Live MOS sensor is capable of high-speed readout over four channels to be compatible with full-HD movie recording. This sensor is also advantageous for photo recording with a high signal-to-noise ratio thanks to the new circuit structure that is unaffected by the noise generated in each of the circuits. This results in crisp photos — even those taken at high ISO levels. The multi-aspect type sensor allows users to take photos in 4:3, 3:2 or 16:9 aspect ratios with the same angle of view. The Venus Engine HD is also energy efficient, supporting long periods of AVCHD video recording on a single battery charge.

In addition to the digital camera’s HD video recording capability, the DMC-GH1 features the LUMIX Creative Movie mode which lets the user manually set the shutter speed and aperture, making their videos more creative and representative of their own personal video style preference. Changing the shutter speed gives the videos a special look, particularly suitable for shooting fast-moving subjects. Controlling the aperture is convenient when there are several subjects at varying distances, so the user can focus on the foreground and blur the background — or vice versa.

While the LUMIX DMC-GH1 has cutting-edge still image and video capture features, the LUMIX GH1 is also incredibly easy-to-use, thanks to Panasonic’s iA (Intelligent Auto) mode** — a user-friendly setting made popular in the LUMIX line of digital point-and-shoot camera products. Panasonic’s iA mode is a suite of technologies which engage automatically (no settings needed). The latest addition to the iA suite of features is Face Recognition, a feature that directs the camera to prioritize focus and exposure on a specific face that that the user had previously registered in the camera.*** This invaluable function makes it especially easy to take sharp and beautifully exposed images of things the user values most in their photos — the user’s friends and family.

Panasonic’s iA mode offers other innovative features which help deliver consistently outstanding photos: O.I.S. (Optical Image Stabilization) to help reduce blurring from hand-shake; Intelligent ISO Control to help limit motion blur by adjusting the ISO sensitivity if the subject moves as the shot is taken; AF Tracking that lets the camera lock onto any subject and keep it in focus even if it moves; Intelligent Exposure which optimizes the exposure for each part of an image, preventing blocked shadows and blown highlights, and helps ensure that gradation and details are reproduced beautifully; and Intelligent Scene Selector which automatically detects the five most common shooting situations — Portrait, Night Portrait, Scenery, Night Scenery and Close-up — and switches to the appropriate Scene mode.

Best of all, the benefits of Panasonic’s iA mode extend to motion image recording on the DMC-GH1. For example, the LUMIX GH1 motion iA includes O.I.S. and Face Detection, which automatically detects a face in the frame and adjusts focus, exposure, contrast, and skin complexion. Intelligent Exposure continually checks the ambient light level and adjusts the exposure setting as conditions change to prevent blown highlights and blocked shadows. Intelligent Scene Selector automatically switches between Normal, Portrait, Close-up, Scenery, and Low Light modes according to the environment.

The Contrast AF system adopted by the LUMIX GH1 is accurate, easy-to-use and fast. Users can choose from a wide range of AF modes, including multiple-area AF with up to 23 focus areas, 1-area AF with a selectable focus area, Face Detection, and AF Tracking. To help keep the images free of spots from dust and particles, the Supersonic Wave Filter dust reduction system helps prevent foreign contaminants from adhering to the image sensor.

After users capture their images using the LUMIX GH1, it’s easy for them to enjoy their photos or HD videos immediately on a large-screen Panasonic VIERA(R) high-definition television. All that is required is to remove the SD Memory Card from the LUMIX GH1 and insert it into the VIERA Image Viewer (SDHC/SD Memory Card slot) located in the VIERA HDTV or in the Panasonic Blu-ray disc player. Alternatively, an optional mini HDMI(TM) cable is available to output the images from the LUMIX GH1 directly to the Panasonic HDTV via VIERA Link(TM). Then, using the VIERA HDTV’s remote control, users can take advantage of the LUMIX GH1’s advanced playback and slideshow features.

In addition to the new LUMIX G lenses, the DMC-GH1 and LUMIX G Micro System is compatible with any interchangeable lens that complies with the Four Thirds standard.**** This gives users access to the entire range of Four Thirds lenses. Additional Micro Four Thirds lenses will be announced in the future, giving users a large, diverse line of high-performance lenses to add to their photographic toolboxes. With the LUMIX G Micro System and the growing assortment of lenses becoming available, the creative possibilities are endless.

For more information about the DMC-GH1 and all of Panasonic’s LUMIX G Micro System accessories, please visit www.panasonic.com/lumix.

“Panasonic is excited and proud to expand our LUMIX G Micro System — with the addition of these two new Micro Four Thirds lenses, as well as the LUMIX DMC-GH1, which can record superb High Definition video,” said David Briganti, National Marketing Manager, Imaging, Panasonic Consumer Electronics Company. “We firmly believe that consumers of all skill levels can benefit from the advanced features we are able to pack into these new compact lenses and camera bodies.”

Panasonic’s other new lens, the ultra-wide-angle zoom interchangeable lens LUMIX G VARIO 7-14mm/F4.0 ASPH features an astonishingly wide-angle zoom range of 7-14mm (35mm camera equivalent; 14-28mm). Its compact and lightweight size makes it easy for users to carry while they are on the go. Taking advantage of its 114-degree wide-angle view, users can fit more subjects in a frame — even when the shooting distance is limited, for example, while shooting indoors. This expansive view gives users great flexibility and a rich perspective when shooting photos or video.

The high-performing, yet lightweight LUMIX G VARIO 7-14mm/F4.0 ASPH. achieves its compact size by incorporating two aspherical lenses and four ED lenses in a unit of 16 elements in 12 groups. The resolution of the images is high, even at its wide-end and features F4.0 brightness through its entire zoom range thanks to a large diameter glass-molded lens embedded within the body.

When both of these news lenses are mounted on the LUMIX DMC-GH1, users can take advantage of the advanced contrast AF system including Face Recognition, offering a variety of convenient and fun shooting. Seven aperture blades give the aperture a rounded shape that, when shooting at a larger aperture, produces an attractive smoothness in out-of-focus areas. Featuring highly-durable metal mounts, the new lenses use multicoated lens elements to reduce ghosting and flares, helping to deliver a positive user-experience — whether shooting HD videos or taking beautiful digital photos. For more information, please visit www.panasonic.com/lumix.