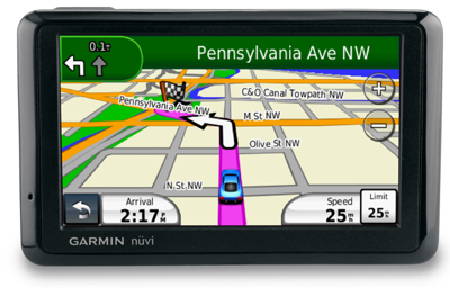 Garmin’s got some new GPS units, y’all. The nüvi 1200 and 1300 continues Garmin’s long tradition of producing multiple models that do almost the same exact thing, but then forces potential buyers to stare at a chart to see which features they can live without to keep the cost down. Basicly there are eight models coming out with little difference between them.

I said it once, and I’ll say it again. Keep it simple, stupid. Why the hell are there so many different version of the same GPS. Why not sell the 1390T with Bluetooth, traffic alerts, and all the maps somewhere in the middle of the price range instead of making five models that with $50 price differences on them? It doesn’t make sense to me.

CeBIT 2009
OLATHE, Kan.–(BUSINESS WIRE)–Garmin International Inc., a unit of Garmin Ltd. (NASDAQ: GRMN), the global leader in satellite navigation, today announced the nüvi 1200 and nüvi 1300 series – an innovative family of navigators with a new ultra-thin design that offer enhancements for navigation in and out of the car. This new series of products introduced at CeBIT in Hannover, Germany, March 3-8, 2009, is ideal for the consumer who wants advanced features at a value price. The nüvi 1200 and 1300 series are the first nüvi devices to offer pedestrian navigation capability enabled through optional CityXplorer™ maps. CityXplorer maps are available for select tourist destinations in both North America and Europe, and can easily be downloaded directly to the nüvi.

Various models of the nüvi 1200 and 1300 product families also provide other premium features like free lifetime traffic alerts and lane assist for added confidence in navigating complicated intersections and turns. All these new devices feature text to speech, a technology that enables the enunciation of names and upcoming roads – enhancing confidence while navigating in unfamiliar locations.

“Our nüvi devices are known for the great navigation experience they provide in the vehicle. Now our customers can have that same great experience when navigating an unfamiliar city by foot or public transportation,” said Dan Bartel, Garmin’s vice president of worldwide sales. “The nüvi 1200 and 1300 products allow us to meet the needs of that on-the-go customer by offering an affordable nüvi that provides location and destination information when, where, and how they need it most. The personal navigation device (PND) is no longer just for the car – take it with you wherever you go and enjoy the enhanced usability and rich features only a dedicated device like this can offer.”

In addition to features offered by other members of the nüvi family, these new multi-mode navigators feature a public transit mode supporting optional CityXplorer content. Available as a download for select cities, CityXplorer allows the user to plan and use routes that can include public transit options such as bus, tramway, metro and suburban rail systems. With CityXplorer, users can get the most out of their navigation experience to many exciting cities across North America and Europe. The thinner and lighter form factor of these new products allows the unit to be more easily carried in a pocket or purse – making it ideal for pedestrian navigation. Content from CityXplorer varies in cost from $9.99 – $14.99, depending on the city. A list of cities offered in North America and Europe is expected to be available in the second quarter of 2009 at www.garmin.com.

To help drivers make their gas tanks go the extra mile, these devices come standard with ecoRoute™, which suggests fuel-efficient navigation. In addition to “faster time” and “shorter distance” for route preference, ecoRoute lets nüvi users choose “less fuel” as the best way to save gas and money. Through ecoRoute’s Fuel Report and Mileage Report, drivers can focus on their fuel conservation, and also find fuel-saving tips along the way.

All models in the nüvi 1300 series boast a bright 4.3” touchscreen display and feature text to speech technology. The nüvi 1300 is available with coverage of the lower 48 states, Hawaii and Puerto Rico, while the nüvi 1350 is available with preloaded comprehensive coverage of North America. For transatlantic travel, the nüvi 1370T comes standard with mapping for North America and Europe. Both the 1350, 1350T and 1370T add lane assist, which highlights the preferred lane for navigation. Building on the aforementioned features, the 1390T adds junction view allowing drivers to see realistic images of upcoming junctions where available. Lifetime traffic alerts from NAVTEQ Traffic are also included with the 1350T, 1370T and 1390T, enabling drivers to steer clear of traffic accidents, road closures and construction. The nüvi 1370T and 1390T come standard with a traffic receiver that will provide alerts in the coverage areas – no subscription fee is required. The nüvi 1370T and 1390T also feature Bluetooth® hands-free connectivity.

Every new model in the nüvi 1200 series feature a bright 3.5” touchscreen display, and features our popular text to speech feature. The nüvi 1200 is available with coverage of the lower 48 states, Hawaii and Puerto Rico, and the nüvi 1250 and 1260T are available with preloaded comprehensive coverage of North America. The 1260T adds Bluetooth hands-free connectivity and lifetime traffic alerts from NAVTEQ Traffic.

The manufacturer’s suggested retail price for these models is as follows: