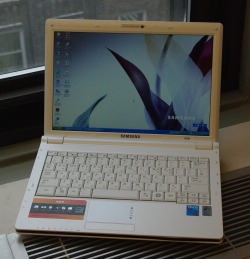 Finally a US release date for the VIA-powered netbook-esque Samsung NC20. Looks like it’ll be here March 16th and it’ll be sold exclusively on Newegg.com at first. Still no price, though. Still… no… price.

According to LAPTOP, the NC20 will be available in black and will feature a 5900mAh battery (around six cells). As you’ll recall, the NC20 uses VIA’s Nano CPU and the big (for a netbook) 12-inch screen has a nice 1280×800 resolution. The weight of the machine, at almost three and a half pounds, is really stretching the whole “netbook” thing, though.

Still, this will definitely be one to watch. It’s priced at the equivalent of just under $500 in the UK, so hopefully it’ll land here at under $500 as well.