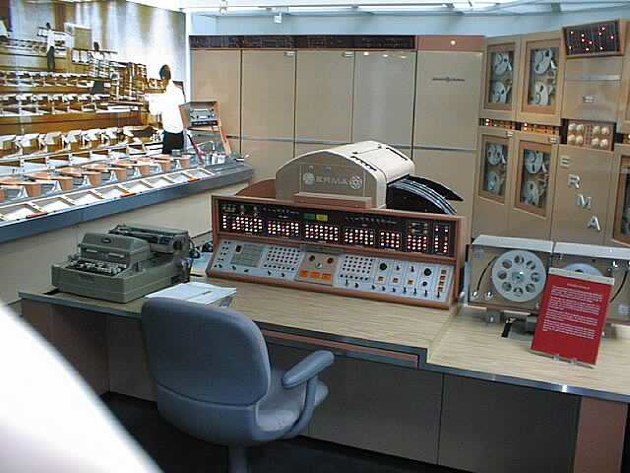 This guest post is written by Jack Arrington, who contributed 50% of the genetic material required to produce TechCrunch founder Michael Arrington. Jack was around at the very beginning of what we today call the Information Technology business. In 1950 pure business necessity drove Bank of America, then the largest bank in the world, to look for ways to automate the labor intensive job of handling checks. From that necessity ERMA was born, one of the first large scale data processing machines for business. Jack joined Bank of America in 1963 as a Computer Operator Trainee. He retired in 2002 as Head of Data Processing Operations.

2009 is the half-century milestone in the use of information technology for business applications, and it’s an opportunity to look back and give a nod of appreciation to those early IT entrepreneurs.

In the mid-20th century, the majority of people did not have checking accounts and none of them had bank-issued credit cards. Those in the lower and middle economic classes mostly relied upon cash to buy goods and pay bills. If funds needed to be sent long distances, Western Union provided facilities for the purchase of money orders that were communicated via telegraph and could be retrieved by the payee in another town or country. But the process of consumer banking was tailored for the needs of people who lived most if not all of their lives in the same town. Banking activities were mostly limited to home and car loans and the average customer was well known by the banking staff.

Throughout most of the country, historic bank processes continued to serve well because most banks were single-office businesses, catering to the needs of a stable and known customer base.

California, though, had unique scaling problems. The state faced an exploding population following World War II, when many of the people who had served in the US military decided to settle there instead of going back to the eastern & mid-western hamlets and family farms of their origin. Jobs in California were plentiful, land was cheap and so was construction material. Homes were thrown up throughout the length and width of the Golden State.

California-based Bank of America, then the largest bank in the world, had earlier pioneered the concept of deploying branch offices of the parent bank in many locations. So BofA followed its potential customers into each new neighborhood, providing home loans and other banking services. But if your account was domiciled in Palo Alto, cashing a check in Modesto was difficult because of an inability to share data between two bank offices, even though they were both Bank Of America branches. Identification of account holders attempting a transaction was primarily accomplished by visual comparison of a transaction signature to the one on a signature card on file at the domiciling bank office. In order to retain its leadership position in commercial and consumer banking, BofA desperately needed a banking solution that would accommodate mobility and the financial flexibility of people and businesses.

The system worked, but just barely. BofA was hard pressed to keep up with the demands on its services. Backrooms of the branch offices were crammed night and day with people tapping away on huge adding machines while manually updating paper ledgers for each account-holder. An experienced bookkeeper could post about 245 accounts per hour, but errors were common and required another person to proof the work of the first. Adding more people to fix the problem simply became impossible, and branches began closing earlier and earlier in the day to deal with the mountain of paperwork that piled up.

By 1950, BofA decided it was time to think about replacing all those people with a computer. At the time, computers were used primarily for scientific and military calculations. But there was no reason they couldn’t be built to handle the mundane but important task of processing checking accounts, too.

Displaying focused insight that should be the envy of many in the current crop of Silicon-Valley entrepreneurs, Bank of America teamed with Stanford Research Institute (SRI) and General Electric to invent and then build the first system of automation for commercial banking. They dubbed it ERMA.

The goal was simple – to create a computer that could keep up with the processing demands of the bank’s customers. Transistors had been developed by Bell Labs in 1947 but functionality had not matured sufficiently to enable the processing required of ERMA in the early 1950s, so SRI first settled on vacuum tube technology to meet the requirements set by BofA. A modified octal binary system served the program assembler and Magnetic Ink Character Recognition (MICR, or E13B,) font was developed to allow checks & deposit slips to serve as machine-readable input. Other methods of input included punch-paper tape, which allowed insertion of alphanumeric data such as names and addresses. Reels of magnetic tape (distributed by dedicated air and road couriers,) allowed current account-balance information to be shared between, eventually, each of 14 ERMA Centers located from San Diego to San Francisco.

These were, by today’s standards, monstrously large machines. ERMA weighed about 25 tons and was spread out through four rooms. It contained more than a million feet of wiring, 8,000 vacuum tubes, 34,000 diodes, 5 input consoles with electronic reading devices, (optionally) two magnetic memory drums, a check sorter, a high-speed printer, a power control panel, a maintenance board, 24 racks holding 1,500 electrical packages and 500 relay packages, up to 12 magnetic tape drives for 2,400-foot tape reels, and a refrigeration system. ERMA used more than 80 kW of power and required cooling by an air conditioning system.

Her primary processing unit (which contained memory and I/O interface units) was about the size of a Humvee. Her complement of 8-12 tape drives were each the size of a refrigerator and her printer was a little bit bigger than a fully-loaded Mini-Cooper. The primary peripheral device that ERMA was designed to serve was the Check Reader/Sorter, which could read MICR encoded checks at a rate of 600 per minute, capturing the data on magnetic tape for subsequent posting, while routing them to one of 12 pockets. The contents of each pocket would subsequently be fine-sorted and packaged for return to the domiciling branch-office with the morning’s journals and status reports. ERMA controlled two of the Check Reader/Sorters, each approximating the size of a Ford Explorer. A complete ERMA system required about 3000 square feet of space, to house her components and serve her auxiliary input and output needs. During the busiest hours, ERMA required 5 operators working in harmony to achieve peak processing capacity. By today’s standards, you might consider her a bit chunky…but in our time, we thought she was lean and efficient.

Programs under execution resided on magnetic tape. When needed, commands and calculations were downloaded into the 4000 bytes of memory (donut-shaped iron core components with each bit approximately the diameter of a dime and twice as thick.) This was long before the deployment of wireless or even wired connectivity to user devices, so output was limited to updated magnetic tape files and printed reports produced on a huge noisy device, which (when not broken), could turn out journals and status reports at a speed of 600 lines per minute.

Nearly a decade elapsed in the design, testing and manufacture of the system before the product was put into service in September of 1959. A total of 32 ERMA systems were purchased by BofA and installed in cities throughout California. Each machine processed up to 33,000 accounts per hour (the output of about 135 experienced bookkeepers), providing daily posting of all customer checking and savings accounts. Best of all, the machines never slept, going 24/7 except for (frequent) maintenance – a GE engineer was on site every day to deal with issues. A single ERMA machine, working a week straight, was able to do the work of more than 500 people.

The decision to deploy ERMA wasn’t about simply replacing high-cost jobs with a relatively low-cost computer. While there were undoubtedly significant operating efficiencies, ERMA quite simply allowed the bank to continue to keep pace with the rapid population growth of California. Without computerized data processing, that would have been impossible.

Other banks soon jumped in line to follow the direction taken by BofA and the technology became standard for most banks in the U.S. Although 50 years have passed, E13B (the magnetic ink font at the bottom of checks) remains the most common machine-readable input standard for financial institutions.) A nice thing about E13B is that with a bit of training and focus, people can read it too, although few today are able to determine which district of the Federal Reserve is encoded in the MICR line on their checks.

ERMA served the BofA well until 1967, when her vacuum tubes grew cold and dim and her limited brainpower could no longer cope. She was replaced by an IBM monstrosity (the 360 and its trail of descendants). Two ERMAs were preserved; one is at the Smithsonian in Washington DC and the other at Bank of America’s Technology Center in Concord, CA.

My time with ERMA lasted only two years but the hands-on experience remains a vivid memory, even with a half-century of progress clamoring to dull my senses.