Fliggo lets you create your own video-sharing site. It hosts and streams the videos, and provides “grandma-friendly” management tools to customize the site and monitor usage. Fliggo sItes can be private or public, and are geared towards groups, companies, or video bloggers who want more control over who can see and comment on their videos, and the ads placed against them. Fliggo takes the expense and custom-work out of building a video-hosting site.

Right now, if you want to create your own video site, the easiest thing to do is to simply use WordPress and embed YouTube’s videos. In fact, that is exactly the approach we used with our own video site, Elevator Pitches. The downside to that is that all of the videos also reside on YouTube, and if we wanted to enable advertising, we’d have to split that with YouTube. Fliggo lets you control all the videos, as well as who gets to comment on them, and the related videos that are suggested alongside them. In fact, Fliggo created a quick-and-dirty version of Elevator Pitches just to show us how easy it could be done. (We’re not switching over, though, so please continue to upload videos to the official Elevator Pitches site).

The basic service is free, but Fliggo charges for premium features such as teh ability to serve ads or host Fliggo on your own domain. The company has a not-yet-public API it shares with partner sites which want to embed Fliggo functionality on their own existing sites. JamLegend (a LaunchBox startup) recently did just that, adding a video section based on the Fliggo API where players can film themselves rocking out on their keyboards (literally).

Above is the screenshot of the JamLegend implementation. Below are screenshots of the Fliggo version of Elevator Pitches and a view of the management dashboard. 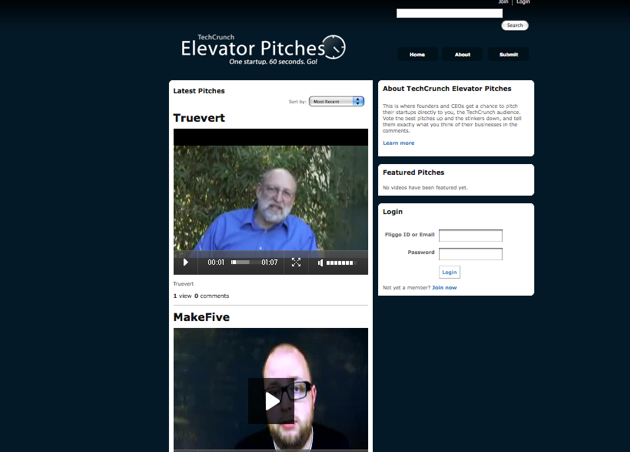