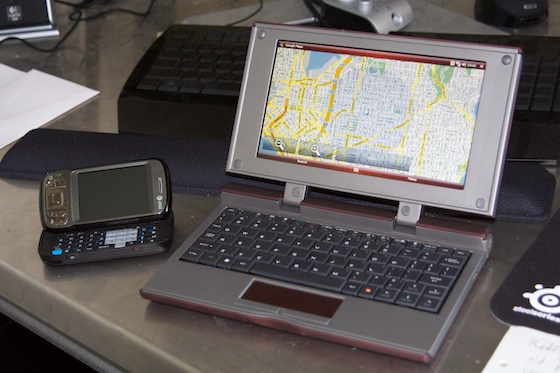 The REDFLY Mobile Companion embiggens even the smallest of compatible Windows Mobile smartphones and PDAs. In light of this, the Memphis police department just threw down for 1,200 of the devices and deployed them in their cruisers, saying, “The REDFLYs save hardware costs while increasing productivity and also improving the quality and accuracy of the officers’ field reports.”

The department had previously been doing everything by smartphone but the small screens and keyboards “limited the officers’ ability to effectively use the [Memphis PD] databases and applications to aid in their jobs.” And reports had a tendency to be much shorter than they should have been since they had to be typed using a thumb keyboard. Spelling errors were frequent as well. The REDFLYs make it much easier to type detailed reports from the field.

Celio Corp today announced that the Memphis, Tennessee, Police Department (MPD) has purchased and deployed 1,200 REDFLY Mobile Companions to officers in the field as an alternative to in-car laptops. The REDFLY is a smartphone terminal with a large screen and full keyboard that lets officers use their Windows Mobile -compatible smartphones as if they were full-blown PCs. The REDFLYs save hardware costs while increasing productivity and also improving the quality and the accuracy of the officers’ field reports.

The REDFLY links to the smartphone via a USB cable or wireless Bluetooth connection. REDFLY enables users to comfortably use email, read attachments, view Web sites, and use applications that reside on their smartphones for greater mobile productivity.

Prior to the REDFLYs, the Memphis PD was using smartphones to gain access to sites and applications such as the Watson Field Reporting Suite and the MPD’s own web database. However, it quickly became apparent that working and typing on the smartphone’s small screen and keyboard limited the officers’ ability to effectively use the databases and applications to aid in their jobs.

“We noticed that when officers use only their smartphones, reports had typos and the quality of the narratives were not as detailed as they needed to be,” said Major Jim Harvey. “The larger screen and keyboard has given our officers what they need to bring up mug shots and individuals’ information from our databases, as well as implement a new Paperless Reporting program to submit incident report narratives. Now they can do their jobs more effectively and are very comfortable using their smartphones to file their reports.”

The purchase of REDFLY has enabled the Memphis PD to improve incident report narratives. The officers now have much larger screen real estate and a larger QWERTY keyboard provided by the REDFLY’s eight-inch display and keyboard.

Harvey continued, “We want to provide our officers with the best technology, while being good stewards of the taxpayers’ money. This is a good investment.”

“The Memphis PD’s decision to use the REDFLY Mobile Companion is a tremendous example of the efficiency and cost savings this technology can provide,” said Kirt Bailey, president and CEO of Celio Corp. “They are showing organizations of every size how to get the most out of their mobile technology investment.”

For more information about the REDFLY Mobile Companion, visit www.celiocorp.com.

[via Tracy and Matt’s Blog]