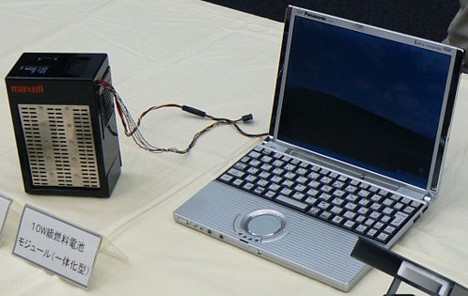 Hitachi announced today [JP] it has developed a methanol-based fuel cell, which is 45% smaller than the company’s existing fuel cells. Hitachi also claims its quieter and “greener” than power generators fueled by gas or diesel. The 100W prototype can generate power for about 1.5 hours on 0.45 liter of methanol.

The direct methanol fuel cell measures 32 x 21 x 22cm and will be tested together with the Center for Process Innovation, a research organization based in the UK. Trials will begin in February and last half a year. Hitachi says the portable fuel cell will be used to power surveillance cameras and road signs.

The company aims to commercialize the fuel cell in 2010 and plans to sell it as a replacement for conventional power generators and as a “green” power source for road signs.