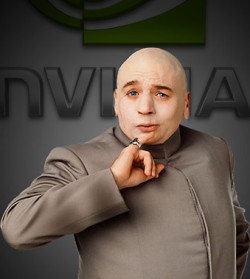 Nvidia, not known for being forthcoming (but perhaps no more than any other tech company), is apparently doing a few sites pretty dirty in relation to its upcoming line of graphics cards. Evidence has been published that shows Nvidia is rebranding some seriously old cards for new sales, which is pretty disingenuous. Unfortunately, sites who have made a stink about it are finding themselves SOL for getting review units.

Not only that, but sites that are getting review units are getting special pieces of hardware direct from NVIDIA, and not retail or OEM versions of the cards manufacturers will be putting on the market. The Inquirer seems to be somewhat bitter about the whole thing, but I can’t really blame them. If Sony or Apple were passing us last year’s tech with new names (any more than usual, anyway), we’d be pissed as well.

More weight to our continuing endorsement of AMD’s graphics cards at this time, then! The latest Radeons are speedy, feature-rich, and cheaper than GeForces. Plus, you’re helping AMD get its wind back. Consider it an act of charity and defiance.