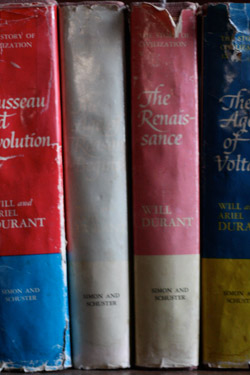 What’s so bad about Amazon and Google Books having a duopolistic stranglehold on the online book-reading industry? That’s what I’d like to know, after the chairman of the Association of American Publishers, speaking at Princeton, said that a recent court ruling between publishers and Google would effectively create a duopoly in the market—Google Books and that “click the read inside” thing on Amazon. I need someone to tell me if I should be outraged, or if I can safely say “eh, whatever” and move on with my life.

The court ruling, which went down last October, says one Richard Sarnoff, sorta makes it hard for any other company to get in the business. Google has to pay publishers $60 per book it scans, then has to ask publishers if it’s allowed to run ads alongside the book. If the publisher gives the OK, Google still has to hand over a portion of the ad revenue to the publishers. You can’t imagine too many startups coming up with that kind of money every time they want to scan a book.

Mind you, this only applies to books that are still under copyright but are no longer in print. Readers get a chance to read impossible-to-find books, and the publishers get paid; Google gets to wet its beak, so to speak. If it takes off, then Google will have just found a new revenue source.

All I want to know is, is that whole setup—Google and Amazon being the only two games in town, as it were—necessarily a bad thing for consumers? Google seems to know what it’s doing with respect to digitizing all those books, and I’d much sooner want Google to do the digitizing than some unknown startup.

At left, some books!