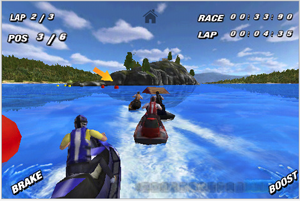 It’s no secret that the iPhone is one of gaming’s hottest new platforms, and while many of the games on the App Store leave something to be desired, every once in awhile we stumble across a game sporting very high production values that rival dedicated videogame systems. This weekend, Resolution Interactive unveiled a new game called Aqua Moto that is strongly reminiscent of Nintendo’s classic game Wave Race 64, allowing gamers to race Jet Skis through a variety of 3D environments. You can grab a free ‘Lite’ version of the game here, but at only $3 the full version (which includes far more tracks) is a bargain.

Beyond its impressive graphics, Aqua Moto shines because its controls are perfectly suited for the iPhone. As gamers tilt their iPhone from side to side their character swerves left or right, and tilting the phone forward or backward controls the acceleration. This isn’t the first game to employ this kind of control scheme – dozens of similar racing games have been released on the App Store since its launch last July. But most of those games are car-based, which means that the controls are often much more ‘twitchy’ and tough to control. Aqua Moto favors broader motions as the vehicles are water-based, which makes the gameplay feel much more natural (and is also a bit more forgiving).

My biggest gripe is that the game fails to tap into the iPhone’s network effect – it would be great if the game supported multiplayer, even if only across a Wi-Fi network. That said, its championship mode seems to be long enough to satisfy most gamers, and is certainly worth the $3 price of admission.