Classifieds aggregation service provider Oodle is on a roll and definitely one of the startups worth following closely this year. After signing up two social networking juggernauts – both MySpace and Facebook – the company is now apparently also behind the just launched AOL Classifieds platform, per blog post by Greg Sterling.

The news comes right after a significant financing round announced earlier this month, when 3 VC firms invested $5.6 million in the company, bringing the total in funding raised to a healthy $21.6 million. Meanwhile, its traffic continues to surge (see Crunchbase profile for some upward-pointing visitor number graphs).

I would be very surprised if Oodle ends 2009 without being acquired for a price that puts a big smile on the faces of their investors.

For context, from the release:

AOL Classifieds is expected to serve as a platform for sellers to promote their listings by leveraging the reach of Oodle’s network of more than 250 partner sites.

Buyers can expect to find deals with access to more than 40 million listings aggregated from more than 80,000 different sites. In addition, AOL Classifieds links consumers directly to classifieds listings on other properties within the AOL network, including AOL Autos, AOL Jobs, AOL Personals, and AOL Real Estate.
AOL Classifieds is the latest addition to the AOL Local Network, which is an online local network with a monthly reach of 54 million unduplicated unique visitors. 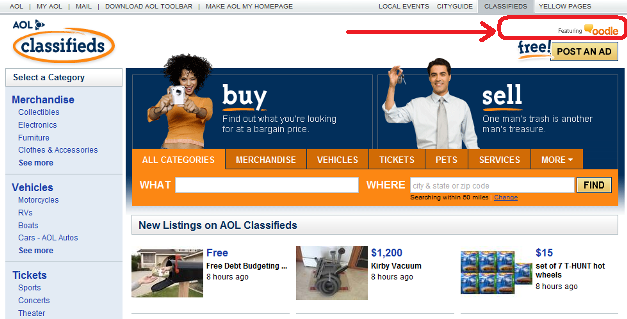