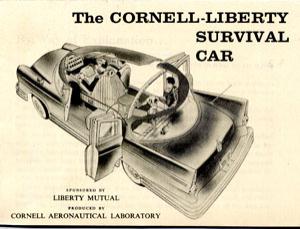 Back in the 50’s, safety features in automobiles were not exactly what you’d call a priority. People were flush with post-war money, and the car manufactures were selling vehicles as fast as they could turn them out, sometimes with fatal results.

Keep in mind that cars during that era frequently did not have any of the safety features that we have today. In fact, they usually didn’t even have seatbelts, or safety glass. A high speed collision was frequently fatal, as the people in the car were frequently thrown through the windshield, or impaled on the steering column.

Liberty Mutual and Cornell University teamed up to build the “Survival Car” which managed to combine the latest technology in the automotive industry in a safe way. Unfortunately, this didn’t go over so well with the Big Three. It wasn’t until the mid 1960’s that the NTSB was created, and by then the Survival Car concept was long gone but many of the features that it had were slowly creeping into production. Things like padded dashboards, collapsible steering columns, and reflective license plates that back then were cutting edge, are now standard equipment.

Now the writer of the column that this is article is about would like you to believe that was the end of it, but it’s not. As recently as 2001 Volvo produced the “SSC” – a safety concept car. In fact, many of the features that this car had are starting to appear in our modern cars. Things like rearward facing cameras and collision warning sensors are becoming more and more common, after first appearing as a concept.