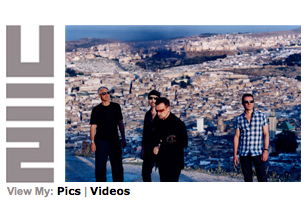 I’m not sure if this was moved up in response to leaked copies of U2’s newest album, No Line On The Horizon spreading across the Internet, but the entire the album will be streamed for free at MySpace Music. The player in U2’s MySpace Music page features a single, but if you click on the top album in the sidebar, you can hear the entire thing. MySpace says that the entire album will be streamed from February 20 to March 3, with links to pre-order it.

This is akin to Radiohead offering a free download of their album In Rainbows for a limited time, except without the download. It is good marketing, at it helps the band try to keep control over distribution. Although, that Bittorrent cat is already out of the bag. (The unreleased album leaked out and has been downloaded hundreds of thousands of times by fans who just can’t wait for U2’s perfectly planned release schedule.

Update: MySpace says the timing of the streamed release was planned all along. Listening to it now. U2 still rocks (or maybe I’m just old).