So VeriSign released its Q4 2008 Domain Name Industry Brief (PDF) yesterday, a document that zooms in on “the state of the domain name industry through a variety of statistical and analytical research”. Let’s take a look at their findings and stats. 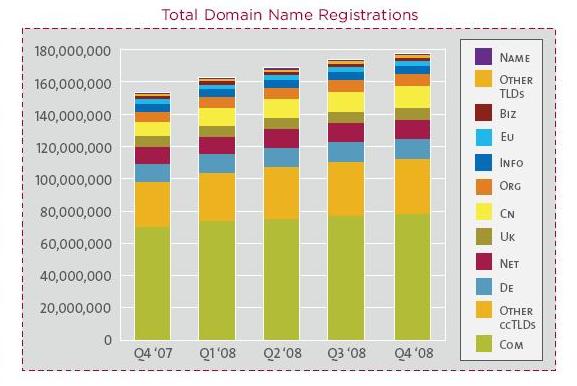 But growth is slowing, likely because of the bad economy (although this apparently didn’t stop VeriSign from raising its prices) and a falling interest and revenue potential for parked domains.

Last year ended with 71.1 million ccTLD (country code Top Level Domains) registrations, a 22 percent increase over the end of 2007. In total, there are more than 240 ccTLD extensions globally, but the top 10 ccTLDs contribute 65 percent of the total number of registrations. Unsurprisingly, .ru (Russian Federation) and .cn (China) were the fastest growing. But overall, the growth of ccTLDs is also slowing down: only 36 percent of the top 25 largest ccTLDs experienced growth rates in the fourth quarter that were higher than the growth rates in the third quarter. 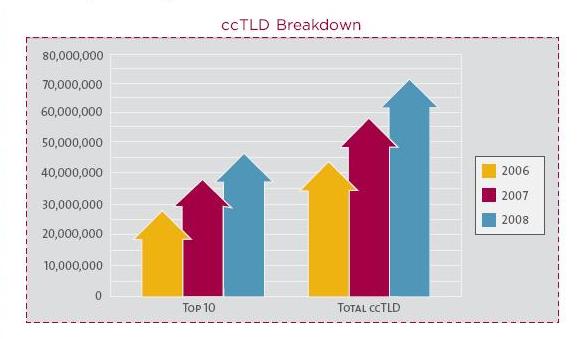 To conclude, an interesting tidbit: VeriSign estimates that 88 percent of .com and .net domain names resolve to a website. Broken down, nearly a quarter of the 90 million .com and .net domain names the company analyzed lead to one-page websites, which include include under-construction, brochure-ware and parked pages in addition to online advertising revenue generating parked pages. 12 percent doesn’t resolve at all.