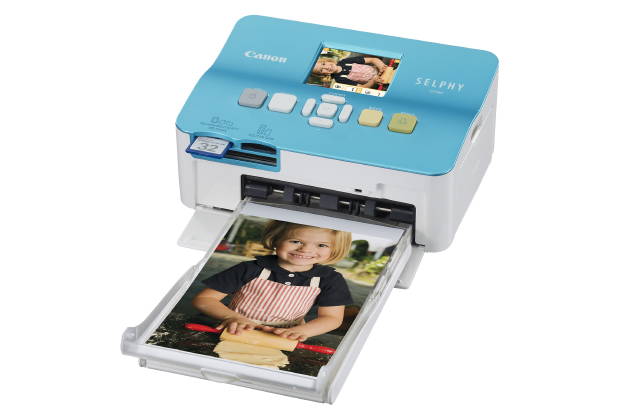 Not only did Canon unless a slew of new digital cameras, but the company also announced the SELPHY CP780 personal photo printer. The brand has been around for sometime, but now – get this – it will be available in a range of colors to match the just announced PowerShot SD1200 IS camera! Spectacular! In all fairness, Canon did equip the printer with updated tech for better pictures.

Within the SELPHY CP780 is a new processor that automatically corrects brightness and color for more natural and realistic look. The printer only take 47 seconds to spit out a 4 x 6 too. And just like previous models, a battery is available for $79 if you simply must have a truly portable photo printer. Expect the printer to hit photo stores and online retailers with an MSRP of $99.99.

ter is ideal for the parent who wants to share images of their children with family and friends.

The Canon SELPHY CP780 compact photo printer is designed not only to be easy-to-use and convenient to carry, it is also available in three different color variations. To coincide with the new Canon PowerShot SD1200 IS Digital ELPH camera also announced today, this compact photo printer is available in silver, blue and pink to enable consumers to express their own personal style when printing out memorable moments from a wedding shower or a weekend getaway.

“Canon SELPHY printers have consistently provided consumers with high-quality images at a reasonable price,” said Yuichi Ishizuka, senior vice president and general manager, Consumer Imaging Group, Canon U.S.A. “Now with the three different color variations, users will not only be able to share their memorable moments but also their own unique style.”

The new Canon SELPHY compact photo printer will produce images of a higher quality than previous models due to enhancements to the Portrait Image Optimize feature. The Face Detection brightness correction and color cast correction have been vastly improved so that skin tones and faces will be produced with natural and realistic colors. The printing process was also revised so that a 4 x 6-inch print can now be completed in approximately 47 seconds1. The easy-to-access card slots allow users to plug in memory cards2 or print straight from the camera with a USB cord.

Designed with a new wave-shaped top surface, the SELPHY CP780 compact photo printer comes equipped with a 2.5-inch LCD screen, making it easy to review images and navigate through menus from various angles. The buttons have been arranged in an easy-to-understand layout for simplicity and seamless navigation through menus. An optional battery pack is available to allow for printing from almost anywhere while providing hundreds of prints before needing to be recharged. The estimated retail price of the NB-CP2L battery pack is $79.993.

Canon BU-30 Bluetooth Adaptor
Making it even more convenient to print images is the optional Canon BU-30 Bluetooth adaptor. Available for the SELPHY CP780 compact photo printer for an estimated retail price of $49.993, the BU-30 adaptor allows images to be sent from Bluetooth enabled devices, such as cell phones, directly to the SELPHY model to be printed.