This rather ridiculous concept car is more artist’s statement than art. The iChange is described as if it were some sort of upset to the entire auto industry. It comes down to ostensibly reduced weight, a centralized driver’s seat to increase balance, and a “pop-up” rear end that apparently makes room for passengers. They seem to have spent a lot of time on photography and videography, and don’t seem to feel that the car is a show-offy compromise in any way, which it certainly is.

They try to distract you with shallow depths of field and Euro chicks with tinted glasses, but the fact is there isn’t much to show here. Their big advancement, the “shape-shifting” rear, is just short of a falsity. 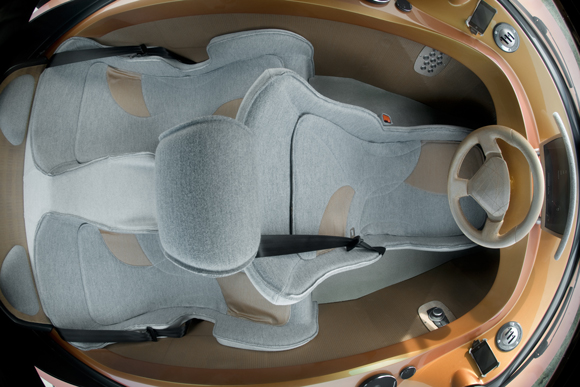 If more than one person need to be transported the expanding rear provides room for two passengers. As a result of the increased weight and no longer optimal aerodynamics the energy consumption increases – but only for the time passengers are actually on board.

Did Rinspeed just take credit for the fact that people only add weight to the car when they’re in it? Not only that, but the mechanism for lifting and moving the seats (not to mention the vulgar and indulgent rising roof) almost certainly adds a huge amount of weight to the car, probably offsetting the minor change in aerodynamics created by lifting it up. And “expanding” is a bit of a stretch for the three or four inches it moves.