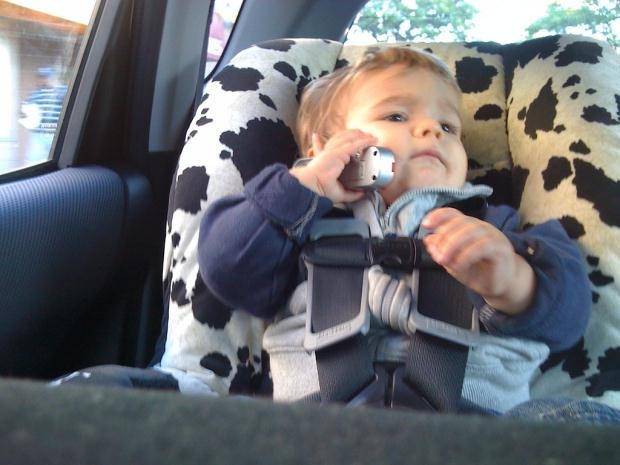 I got my first cell phone at the ripe old age of 20. The year was 1999; the Roth IRA was taking the world by storm, a little show called Futurama set about to claw its way into popular culture, and the song “No Scrubs” by TLC was climbing the charts and had guys who thought they were fly (also known as “busters”) rethinking their mating strategies altogether.

Getting your first cell phone at age 20 nowadays? The stuff of schoolyard mockery! According to the Telegraph, the average age for a kid to get his or her first cell phone is eight. Eight! I think it’s funny to see little kids talking on cell phones. The handsets are too big for them and the act of communicating on a mobile device makes them look like tiny, tantrum-prone adults.

The numbers come from a survey of “1,435 people including 546 children aged seven to 15, 676 parents and 759 grandparents between January 16 and 26,” finding that 35 percent of children own a cell phone by age eight. I’m not sure how that equates to an “average” since it’s only 35 percent and they didn’t ask anyone under the age of seven – that E*TRADE baby has a BlackBerry, he totally would have brought the average down – but even 35 percent of kids aged eight or younger is still kind of amazing.

The survey was also conducted in the UK where cell phone service is more affordable per capita, so that might skew the numbers a bit. And let’s face it, it might be nice for parents to (theoretically) be able to get a hold of their kids easily and for kids to have a solid means of communication in an emergency. The study also concluded that cell phone use teaches kids about money management, particularly as it pertains to buying ringtones.

“It found that children as young as seven were offering to do chores in exchange for cash to buy ringtones.”

I believe that when I was that age, I was doing chores for money to play Teenage Mutant Ninja Turtles: The Arcade Game down at the local candy store.