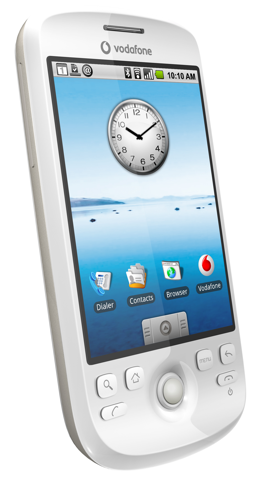 We were just starting to worry that Mobile World Congress 2009 would go without pass by without an Android press announcement, but Vodafone and HTC have swooped in to save they day. They just announced the HTC Magic, a full touchscreen Android device which bears quite the resemblance to the HTC G1 – except with a bit more polish, and without a keyboard. It’s also a perfect match with the shot that leaked out yesterday.

The HTC Magic will have a 3.2 megapixel camera, trackball, 3.2″ HVGA (480×320) capacitive touch screen, GPS, accelerometer, and WiFi. Look for it on the shelves this spring exclusively from Vodafone in UK, Spain, Germany and France, and non-exclusively in Italy. No plans have yet been announced for US availability, but it’s something they’re working on.

Update: Full specs after the jump.