A total of 52 companies launched at last year’s TechCrunch50 conference. Five of them got jury selection prizes, there was one big winner and a very special crowd pleaser: Japan-based Tonchidot’s Sekai Camera, an iPhone app that presents tagged information in the form of a graphical layer over images in the iPhone camera.

Charismatic CEO Takahito Iguchi delivered a memorable demonstration, making the audience go crazy by fending off questions of TC50 judges such as Tim O’Reilly if Sekai Camera really works with the words “Join us!” or “We have a patent!”. The reason for the skepticism: Iguchi’s on-stage show mainly centered on a pre-produced video clip, not an actual product demo. This left people wondering if Sekai Camera isn’t just vaporware for almost half a year during which it seemed like nothing happened. But today I saw the app is real and working – on an iPhone. 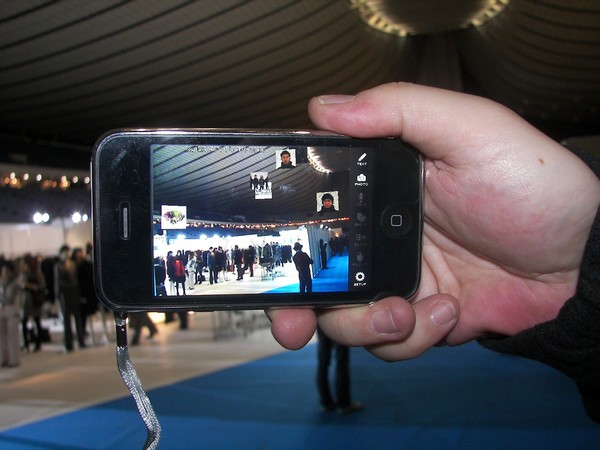 Tonchidot organized an invitation-only event at an exhibition in Tokyo today, showcasing a working prototype for the first time. Sekai Camera’s basic concept is still intact: Use the iPhone camera to overlay tags and information onto any object in the real world. Users then need to look through the camera to see icons pop up that contain information on buildings, stores, sightseeing spots or objects.

The prototype I tried out today was a bit buggy but worked as promised, showing tags with information (sounds, pictures and text) on other booths installed in the exhibition hall. Many people speculated how Sekai Camera works technically. The answer is simple: The user’s location is identified through GPS (no cell-tower triangulation or image recognition technology is being used). As the iPhone doesn’t have an internal compass, the direction of where the viewfinder is pointed at can’t be measured: Users need to flick fingers left or right to find relevant tags that are around them (as demonstrated in the video I took below). Tap a tag and the information it contains appears in the form of a window, for example a picture with a comment box below it or a voice message someone left earlier. 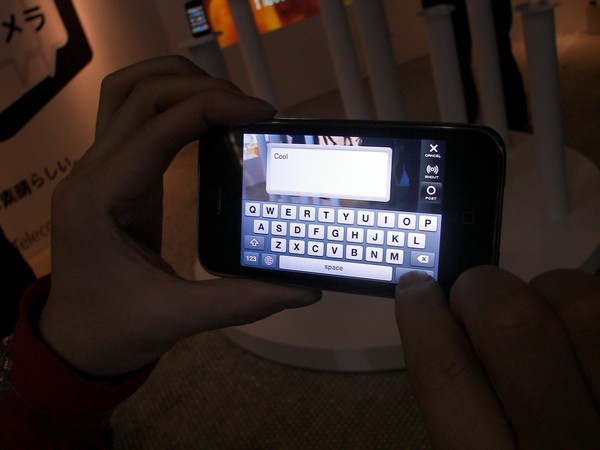 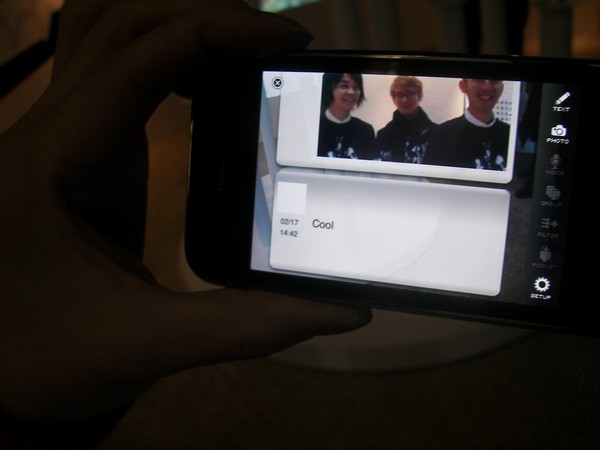 Tonchidot today showed they were rightfully chosen as a TechCrunch50 finalist. Sekai Camera is incredibly cool technology even though the prototype version didn’t look as flashy as the previous one shown on video. For a massive land grab, Sekai Camera will have to come up with a viable business model, achieve a critical mass of tags to make the app worthwhile and optimize the technology.

But Tonchidot is working on it. Iguchi said he is in talks with companies interested in contributing commercial tags that could contain anything from ads, coupons to product information for a fee. Tags are also being scraped from various web services such as Yahoo Japan’s Wai Wai Mappu (a community-style map information service). But Sekai Camera also needs user-generated tags – lots of them. While a compass built into a future iPhone model might solve the directional alignment issue, GPS within buildings will most likely remain a problem for quite some time. (For tagging the exhibition hall today, locations were measured through Wi-Fi signals an external service called PlaceEngine provided.).

According to Tonchidot, Japan will be covered with social tags first, followed by the rest of the world. Asked when Sekai Camera will be available for everyone to buy, Tonchidot fellow Masayuki Akamatsu told me: “In 2009, sometime when it’s warm!”. We will stay tuned.