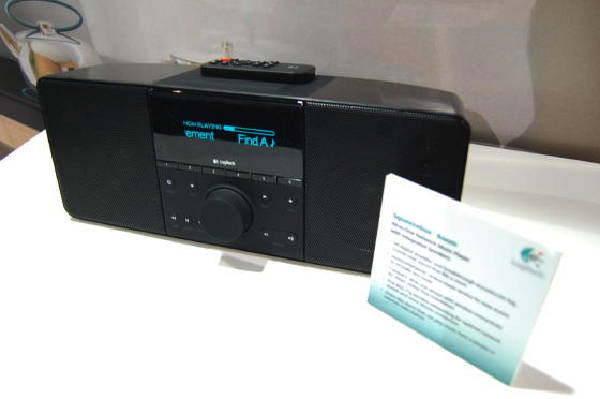 Squeezebox owners: You can now access Napster music right from your your WiFi boombox.

That is, of course, you subscribe to the music service for $12.95 a month. But if you do, or will, different music genres can be selected for your listening pleasure and streamed to the boombox over WiFi or a wired connection. Exciting.

FREMONT, Calif.–(BUSINESS WIRE)–Logitech (SIX:LOGN) (NASDAQ:LOGI) today announced that Logitech® Squeezebox™ network music players support online music from the award-winning music subscription service Napster® . Using your existing wireless home network and your Squeezebox player, now you can access Napster’s library of more than 7 million songs on the home-entertainment system in your living room, bedroom, or in any room where you listen to music.

“Logitech is delighted to add Napster to its family of online music services for the Squeezebox product line,” said Robin Selden, vice president of the Logitech Streaming Media group. “The Logitech Squeezebox is a Wi-Fi device, so you don’t have to string wires everywhere just to enjoy Napster away from the computer. Whether you love rap or reggae, Beethoven or classic rock, Napster and Squeezebox make it easy to listen to a world of music, streamed to any room in your home.”

Napster can deliver music, on-demand, through any Logitech Squeezebox network music player. Using Napster, you can choose from millions of songs from all major labels and thousands of independent labels, discovering old favorites and exploring new music from Napster’s playlists, new releases and Billboard charts.

“Napster, a pioneer of digital music, has always offered the ultimate in interactive music experiences, creating better ways to discover, share, acquire and enjoy music,” said Napster President Brad Duea. “Online music is growing more popular every day, and the link between Napster and a Logitech Squeezebox is a natural one. Together, Napster and Logitech are harnessing the potential of the digital world for music lovers everywhere.”

Logitech, the Logitech logo, and other Logitech marks are registered in Switzerland and other countries. All other trademarks are the property of their respective owners. For more information about Logitech and its products, visit the Company’s Web site at www.logitech.com.