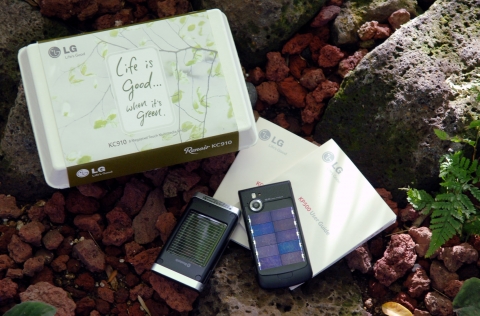 Recently, many companies have announced green initiatives and recycling programs. LG is following suit and has announced its own green products and initiatives under its a new slogan: “Life’s Good When It’s Green.” We saw the beginnings of this with their big solar and wind charger at CES.

The first is a mobile phone featuring a solar panel on the battery cover. The cell isn’t going to be able to provide much juice, but LG claims that a ten minute charge will power the phone for 3 minutes. Not bad. Especially during an emergency when your battery runs out. It can also sustain the cellphone on standby without needing to be plugged in.

The second product is a Bluetooth solar car kit that they unveiled at CES this year. It is a hands-free unit that runs on a solar cell. Should be easy to charge since it sits on your dash.

LG is also introducing eco-friendly packaging and product manuals that are made with recycled cardboard and soy inks. They’ve promised to remove all halogenated substances from their handsets by 2010 and antimony by 2012. Good stuff, LG.

Here is the press release:

Seoul (Korea Newswire) February 17, 2009 10:11 AM — LG Electronics, a worldwide technology and design leader in mobile communications, today unveiled its eco-friendly mobile phone equipped with a solar panel battery cover at the Mobile World Congress 2009. This Solar-powered handset is part of the company’s aggressive green initiative, proving LG’s commitment to creating a healthier environment for everyone.

“Using renewable solar energy in the mobile handset is an example of our ongoing efforts to help create a safer, cleaner environment for our customers,” said Dr. Skott Ahn, President and CEO of LG Electronics Mobile Communications Company. “LG continues to research and invest in creating products that not only provide a better experience for consumers, but also encourage an environmentally responsible lifestyle.”

The phone’s solar power system is embedded onto the battery cover, to conveniently harness the sun’s limitless and pollution-free energy. By simply pointing the phone’s solar panel at natural light, the panel will convert solar energy into electricity without needing to be plugged in. Exposing the panel to the sun for ten minutes will give the phone enough power for a three-minute call, making it the perfect companion for emergency situations when no power is available to charge a dead battery. If left in natural light for long periods, the solar panel creates enough standby power to power the phone without any charging devices. LG plans to release this eco-friendly phone in the European market at the end of this year.

LG’s green initiative has not stopped at phones. The company’s LG HFB-500 Bluetooth solar car kit, first introduced at this January’s Consumer Electronics Show in Las Vegas, gives customers hands-free mobile use in a fully rechargeable solar unit. In addition, LG is introducing green packaging to its entire line of 2009 mobile handset models. The eco-friendly packaging saves natural resources and promotes easy recycling by printing with soy inks and using recycled paper and cardboard without laminate coating. LG will also expand the use of its eco-friendly product manuals, produced with soy ink and recycled paper, to a broader range of models in 2009.

LG is also taking a step forward in reducing the use of hazardous substances in its products and instead using sustainable ones. LG adheres to strict requirements administered by the EU’s RoHS regarding the management of hazardous substances including lead (Pb), cadmium (Cd), mercury (Hg), hexavalent chromium (Cr6+), polybrominated biphenyl (PBB) and polybrominated diphenyl ether (PBDE) in its production processes. The company also plans to make its mobile handsets free of halogenated substances, a known endocrine disruptor, by removing Brominated flame retardants (BFR), chlorinated flame retardants (CFR) and polyvinyl chloride (PVC) from the manufacturing process by 2010 and will make all handsets antimony-free by 2012.

The LG Solar-powered handset, Bluetooth solar car kit and new green packaging will all be showcased at the Mobile World Congress 2009 in Barcelona.