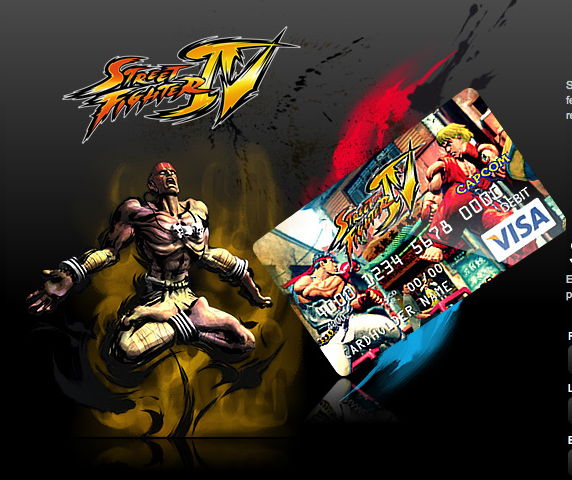 In conjunction with the launch of Street Fighter IV, Capcom announced the Capcom Unity Visa card. At first I thought this was a credit card and felt it necessary to go on a rampage with the economy being the way it is, but then the rage subsided and I kept reading the press release. It turns out this isn’t a CC, but a prepaid Visa card.

It’s just a nerdy way for gamers to show their loyalty and nerd cred to the world. As you use the Unity card you build up points towards rewards like free downloads, rare merchandise and other frivolous things. But the real deal lies in the 15 percent discount on all purchases made from the Capcom online store. Unity card holders are also privy to closed beta tests for new games, a chance to win all Capcom games for the next five years (!!!) and a few other goodies. Damn, I may have to sign up for this thing.

Get a 15% discount on ANY purchases from the Capcom Online Store. Just buy two full priced games and your card pays for itself.

* Earn a half-percent cash-back on your every day spending
* Earn up to 20% cash-back from Capcom Rewards Mall with over 750 online merchants, like iTunes, BestBuy.com, Target.com and more.

* Redeem cash back for gift cards at a discount, or load the cash right on your Capcom-Unity Visa card.

* Earn points which are redeemable for free downloads, rare merchandise, unique one-of-a-kind experiences, and a variety of other, unique rewards.
* Earn 5,000 Unity points just for signing up
* Earn 500 Unity points each time you load your card via payroll direct deposit Earn 5 Unity points for every dollar you load on your card
* Redeem Unity points for points based auctions a variety of exclusive Capcom rewards, such as an all-expense paid trip to major video gaming events, be written into a game, have lunch with a game producer and much more.