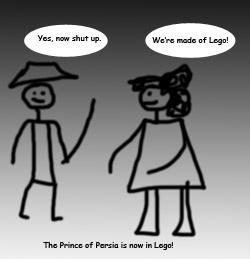 Exec: Okay, team. Times are tough and my wife has put on 20 pounds since Christmas. We need a surefire hit to cushion our bottom line and get those investors off my back. Any ideas? Johnson, what say you?

Murphy: I’m just the janitor, remember? You told me to come in here so you could yell at somebody and look important to your subordinates.

Exec: Well, then, looks like you’ll serve your purpose after all. [Exec spits on the floor.] Now clean it up!

Exec: And what universe would that be, Jones?

Jones: Persia, sir. It’s what they used to call Iran.

Exec: Hmm, Iran, not too sure about that. Aren’t we at war with Iran?

Jones: Not yet, sir. Maybe you’re thinking of Iraq?

Exec: Bah, they’re all the same. But excellent, that means there’s still time for us to exploit the country’s history and culture for our own personal gain.

Jones: Oh it gets better, sir. Instead of basing this game on the just-let-it-die-already franchise, we’ll base it on the upcoming Disney movie of the same name.

Exec: And what name would that be, Jones?

Jones: Price of Persia: The Sand of Time, sir. It stars Jake Gyllenhaal and Gemma Arterton. Studio says they’ll have it ready in 2010.

Exec: I don’t know who those people are. Are they famous?

Jones: Well, no, not in the traditional sense of the word. But the studio will launch a publicity blitz right as the movie is coming out. Leno, Letterman, puff pieces in exchange for journalistic integrity in the weeklies, etc. By the time it comes out, the public will be convinced that they’re famous even though they’re complete nobodies.

Exec: [Lights a cigar.] What? Oh, right, yeah, sure great. Bottom line it for me, Jones.

Jones: The game should be out in 2010 probably for every system under the sun, and it’ll be based on the movie, not the terrible games. And people love Lego for some reason. With the studio’s support, I’m sure IGN will at least give it a 7.034532, while simultaneously calling it a “cinematic achievement.” We can’t lose.

Exec: Perfect, Lego Prince of Persia it is. Hire the county dogcatcher to write the script and get someone who made a funny YouTube video to do the art direction.

Jones: Way ahead of you, sir, only the dogcatcher said he didn’t want to be associated with this project, said it was demeaning. We’ll have to settle for an NBC television writer.

Exec: Son of a bitch, fine. You keep trying that dogcatcher, though, I don’t want this project saddled with the stench of failure (a sitcom writer).