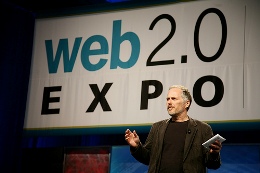 I’m not going to discuss the economic meltdown and its devastating effect on technology companies and internet startups in this post, but rather something that crossed my mind earlier this morning: “Web 2.0” seems to become more and more a void (and an avoided) term. Of course, that’s not necessarily a bad thing, but it is definitely apparent.

So why do I say it’s fading? For one, because the number of startups that contact us and include the term Web 2.0 in the subject line or message is visibly dropping (and that’s a good thing), and I hardly ever see it mentioned anymore on other technology blogs and news sites either. That’s not really tangible, so I took a look at the number of mentions of the phrase across the web, and they seem to be decreasing significantly, reflecting my feeling on this.

Judging by Google Trends, which shows how often a particular search term is entered relative to the total search volume across various regions of the world (and in various languages), the term started being used at the end of 2004 when Tim O’Reilly organized the first edition of the Web 2.0 Conference. Search queries for the term started picking up in the middle of 2005, when TechCrunch was started – with the tagline “Tracking Web 2.0” by the way – and the number kept increasing until the end of 2007. After that, the trend is clearly downwards, falling back to the level it reached in early 2006 today. If the trend continues, there should only be a handful of people left who scour search engines for “Web 2.0” by 2011. 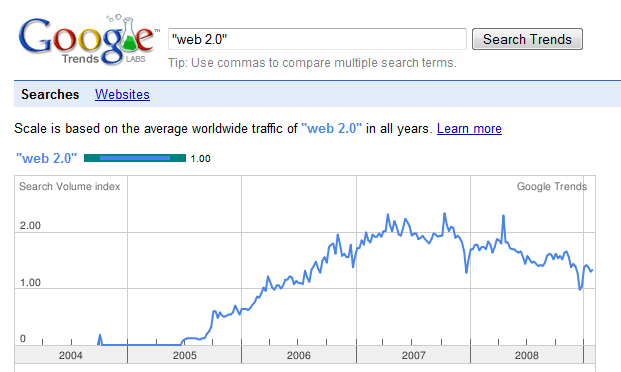 Also noteworthy: take a look at the geographic regions that have generated the highest volumes of worldwide search traffic for the term over the years – it’s Asia, with the top 5 regions being India, Singapore, Hong Kong, Taiwan and Malaysia (in that order). Furthermore, Google Trends pegs the number one language in which people search for stuff related to the topic of Web 2.0 to be Russian before English.

And just in case you’re curious: “Web 3.0” doesn’t seem to picking up much.
Let’s all rejoice.

Google’s “Insights for Search”, a beta service that analyzes a portion of worldwide Google web searches from all Google domains to compute how many searches have been done for the terms you’ve entered – relative to the total number of searches done on Google over time – gives an even better overview: 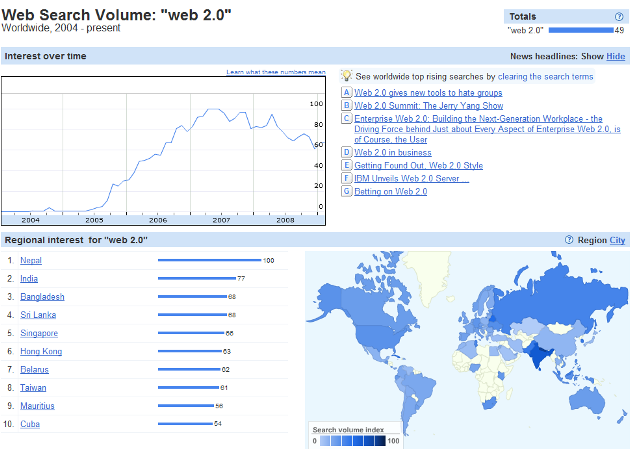 I’ve never had anything against the phrase “Web 2.0”, but I wouldn’t miss it a bit if it were never used again.