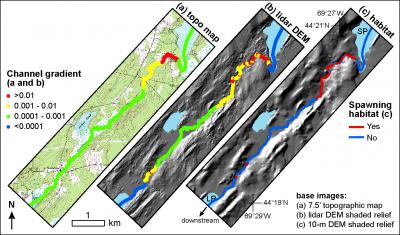 Scientists are using a laser mapping system called lidar to map the run and topography of streams and rivers in order to help maintain fish populations. By looking at the actual bottom of streams by shooting it with lasers they can tell where fish might move next and where their spawning locations are.

“It’s kind of like going from your backyard telescope to the Hubble telescope,” says Boston College Geologist Noah P. Snyder. “Restoring fish habitat is just one example. For the fisherman, backpacker, forester, land use planner or developer – anyone who uses map data – this new technology is the next revolution in mapping.”

Airborne laser elevation (or lidar) surveys provide a 10-fold improvement in the precision with which topographical features are measured, Snyder reports in the current edition of Eos, the weekly journal of the American Geophysical Union.