I’m no watch freak like Biggs or Freeman, but there’s something about Casio’s G-Shocks that I just can’t shake. This new line of limited edition military inspired G-Shocks certainly doesn’t help either. All are encased in matte black with buttons finished in black ion plating and have reverse LCDs with red numeric displays. Want. All of them.

G-9000MS-1: the classic G-Shock Mudman is built to survive the most extreme environments. Features include a molded back cover and variable durometer urethane covered bezel and buttons to prevent foreign particles, such as mud, sand or oil from entering the watch or accumulating between the back case and wearer’s wrist.
The Mudman features 200M water resistance, world time, dual auto EL backlight with afterglow, twin stopwatches, and count down timer. MSRP: $110.00

GW-200MS-1: The exclusivity of the G-Shock Frogman makes it the perfect addition to this military-inspired series. As part of G-Shock’s Master of G series, the amphibious Frogman is the only model certified ISO200M water resistant.
Visually stunning, yet stealth in its appearance, the Frogman GW200MS-1 utilizes Non-Stop Tough Solar Power housed within an asymmetrical titanium case design with a deep wave band. MSRP: $350.00 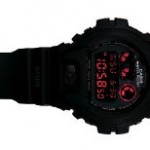 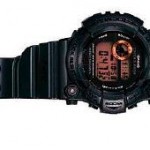