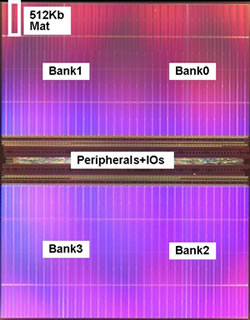 Toshiba today in Tokyo unveiled a prototype of a new kind of FeRAM (Ferroelectric RAM) [JP] that might pave the way for more powerful mobile devices and PCs in the future.

Toshiba has been doing research in that field for years now and presented a 64MBit Feram chip back in 2006 already. This year, the company shows a module with 128 MBits and 1.6G/s data transfer speed (the old model achieved just 200 MByte/s).

Toshiba will present the FeRAM chip during the ISSCC2009 conference to be held in San Francisco later this week. The company said it hopes to use FeRAM chips particularly in mobile electronics in the near future and will keep on investing in FeRAM R&D.