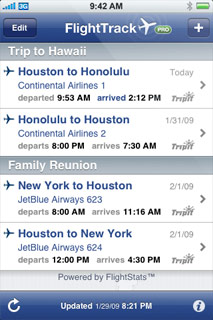 Appropros Mobile has released a Pro version of its popular FlightTrack iPhone application that can automatically pull in your flight itineraries through TripIt’s recently released API.

The original FlightTrack application, which costs $4.99 and is currently ranked third among the iPhone App Store’s top paid travel applications, asks for you to enter an airline, a flight number, and a date. It then displays a travel map with route and weather information, and it tells you whether the flight’s gate has changed or if there’s been a delay.

The new Pro version essentially saves you from having to remember flight numbers by giving you a list of the itineraries you have already emailed to TripIt. You can still look up flights manually (perhaps when you want to retrieve the status of a flight for a friend or family member), but you’ll always have your own travel information ready for quick access.

By releasing an API and deciding not to develop its own iPhone application, TripIt has essentially offloaded its mobile users to Appropros Mobile (TripIt does have a mobile iPhone site but it’s not nearly as functional). Unfortunately, this means TripIt will miss out on the revenue that Appropros gets to generate with its data, not an insignificant amount at $9.99 a pop for FlightTrack Pro.

This could be a strategic mistake for TripIt since travel is by definition a mobile activity. However, travel social network competitor Dopplr hasn’t released an iPhone app of its own either, so perhaps neither company has felt enough competitive pressure in the mobile space yet.