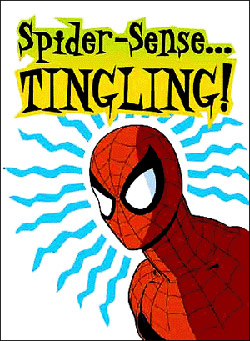 Those eggheads at MIT are at it again, this time creating a “sixth sense” gadget. It’s basically a combined scanner and 3D projector (with a touchscreen-like surface). Say, for example, you’re at the store looking at different boxes of cereal. You scan the box of Lucky Charms with the gadget, which then scans the Internet for, I don’t know, nutritional information and a history of the product. Handy.

Or maybe you’re shopping for a used car—all you need to buy in this economy is two empty soda cans and a piece of tin foil—and want to know its crash history, if it has one. Scan your device, and bam, the information pops up in front of you like in Minority Report. Want to know what the reviews are like for that game you’re about to buy? Scan away, citizen! And yes, you’re able to manipulate the projection as if it were your iPhone.

The device itself—a Web cam, cellphone and a projector—is a wrist-mounted wonder that was put together for $300.

But don’t get your hopes up, since we’re still a good 10 years away from seeing anything even remotely close to this being manufactured on a large scale.