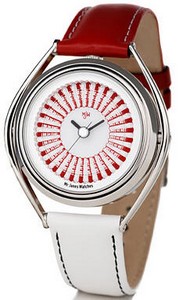 Friend, it never had to start. You’re the one who paid $145 for this crazy watch.

The design of this watch is inspired by the game of effeuiller la marguerite in which “loves me, loves me not” is spoken while plucking the petals of a flower.
Loves Me acts as a never-ending, animated flower that answers love dilemmas: pulling up the winding crown stops the mechanism and reveals cupid’s verdict.