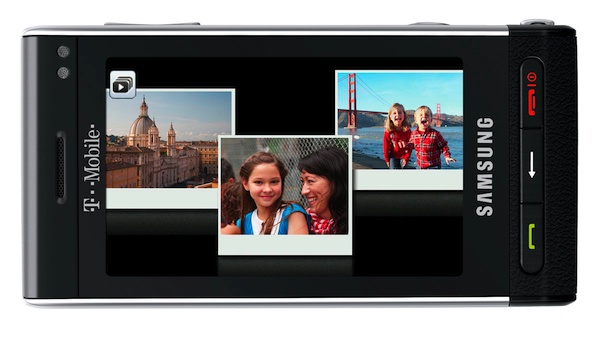 We know just about all there is to know about the 8-megapixel Samsung Memoir at this point, but that doesnt keep us from gettin’ that funny feeling we get whenever a carrier makes a handset official. It’s like an angel getting their wings – except instead of an angel it’s a phone and instead of wings it’s a press release. Still, yay!

There’s still no official word of when it’ll drop or pricing, but the leaked spec sheet (which points at a release in late February) has been pretty spot on so far.

What we know about the Memoir:

The Memoir, available exclusively from T-Mobile, is designed to look and feel like a customer’s current point-and-shoot digital camera. The built-in 8-megapixel camera with Xenon flash, 16x digital zoom and five shooting modes empower customers to capture exceptional photos and videos from their phone — whether they’re on the go, on a vacation or just hanging out around the house.

“With the 8-megapixel Samsung Memoir, T-Mobile customers can capture and share little slices of life in all their vibrant brilliance,” said Denny Marie Post, chief marketing officer, T-Mobile USA. “With the ability to share photos at your fingertips, the Memoir helps make those connections more meaningful by their immediacy.”

The Memoir’s full-touch virtual QWERTY keypad and multiple messaging capabilities, including text, multimedia messaging, instant messaging and e-mail, make staying connected quick and easy while on the go. The Memoir is complete with a music and video player and built-in Assisted GPS navigation, which allows customers to utilize location-based services including turn-by-turn directions. For hands-free use, the Memoir features stereo Bluetooth® technology, speakerphone and voice-activated dialing.

“This is the camera phone that will make people want to leave their digital camera at home,” said Bill Ogle, Chief Marketing Officer for Samsung Mobile. “When you combine the Memoir’s imaging capabilities, customizable menus and music player, not only is it a great phone, but the entertainment possibilities are unlimited.”