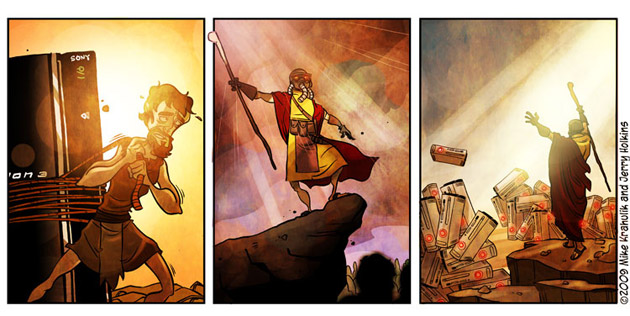 Let’s put on our literature analysis hats for this one. Here we have the traditional three-panel Penny-Arcade comic. The allusion to the Exodus should be obvious to most everyone, only the principal characters—Moses and the everyman (slave)—represent something else entirely.

Panel one: The everyman (slave) is burdened with dragging the PS3 under the hot sun. Presumably, this refers to the fact that, on any message board, the PS3 fanboys have the unenviable task of defending the PS3 from the mean-spirited Xbox 360 fanboys. “It’s a great system, really! You’re just a bunch of Xbots!” They’re dragging the PS3, aimlessly, until the day they die.

Panel two: Now this is where it gets interesting! Here we have the role of Moses played by, um, someone from Killzone 2, the upcoming game that many on the PS3 side of the fence hope Will Be Great. Moses, strong and wise, looks out over his people (PS3 fans/slaves). He has come to save us!

Panel three: Is that the Red Sea, entirely comprised of RROD’d Xbox 360s? It sure looks like it. Part, blasted broken Sea, so I can lead my people to freedom.

Killzone 2, our sweet savior. Lead us!