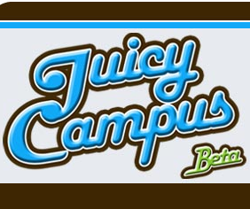 JuicyCampus, a website that invites students to post anonymous (and often-times libelous) messages about their peers, is headed for the Deadpool. In a blog post on the company’s website, founder Matt Ivester blames the site’s demise on a lack of revenue, despite steady growth:

Unfortunately, even with great traffic and strong user loyalty, a business can’t survive and grow without a steady stream of revenue to support it. In these historically difficult economic times, online ad revenue has plummeted and venture capital funding has dissolved. JuicyCampus’ exponential growth outpaced our ability to muster the resources needed to survive this economic downturn, and as a result, we are closing down the site as of Feb. 5, 2009.

I wouldn’t be surprised if some of the site’s advertising issues stemmed from the fact that it often featured incredibly hateful and mean-spirited content that advertisers were hesitant to be associated with. Ivester has long maintained that the site was for ‘Juicy’ gossip, not mean insults, but with top threads including “Biggest Whore At Tulane”, it was hardly a place for light-hearted fun. In light of the overwhelmingly negative comments found on the site, some schools began banning JuicyCampus entirely, leading Ivester to claim that they were “joining the ranks of the Chinese government in internet censorship, and spitting in the faces of everyone who believes in free discourse online”.

Ivester may also be growing increasingly worried about the litigation threats the site receives for defamation and libel. Ivester has claimed legal protection, citing the fact that he didn’t author any of the defamatory posts, but he may not be too eager to put those claims to test in court.

Update: The site’s FAQ discounts any suggestions of possible lawsuits or advertisers pulling out from the site, but given JuicyCampus’s history of turning a blind eye to trouble, it’s a little hard to take at face value:

Does this have anything to do with the investigations by Attorneys General? Other legal reasons?
No, not at all. No charges were ever brought against JuicyCampus by any AG. The site is likewise not shutting down as a result of any lawsuits or other sort of legal trouble. JuicyCampus’ services and policies have always been well within the law.

Is this because advertisers pulled their ads from your site?
No. Online ad spend dropped across the board as the economy took a turn for the worse. Our advertisers have spent less, but have remained loyal, and for that we are very much appreciative.

Is this because too many campuses banned you?
No. The vast majority of campuses decided not to censor their students. Our traffic levels have remained very strong. Any revenue lost as a result of the campuses that banned us was negligible.

We’ve added JuicyCampus to the Deadpool.